Who Will Die? is the first Signature Story Arc released in game. It is a seven part series, the end of which will see one of the Surviving Eight dying, removing them from the game.

Each part of Who Will Die?, called an "episode", is available for purchase on the Paragon Market for 400 Paragon Points; each episode must be purchased separately. VIP Players also have Signature Story Arcs available to play for free as long as they keep a subscription; dropping to premium requires purchase to continue playing. 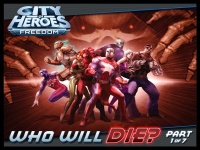 A mysterious obelisk has been unearthed by the Circle of Thorns. It is rumored that it can remove powers from a hero and transfer them to someone else! What member of the Freedom Phalanx will be targeted, and what role will you play in all of this? 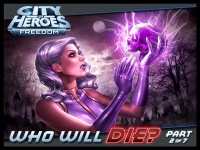 The Midnighter Club has been attacked by a mysterious cult, and Numina's father has been kidnapped in the attack! What purpose does this cult have in kidnapping Numina's father, and who exactly is behind the growing number of attacks against the Freedom Phalanx? 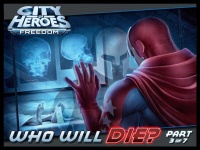 Marshal Blitz, leader of the Rogue Arachnos, has requested a meeting to negotiate a peace treaty between his group and the heroes of Paragon. He has specifically requested that Alexis Cole-Duncan, daughter of Statesman and mother of Ms. Liberty, be present to negotiate. Is Blitz serious, or is he somehow part of the plot to kill a member of the Phalanx? 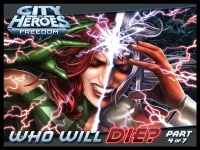 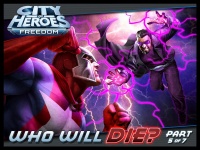 The hunt for Darrin Wade is on! Statesman is still missing, but the remaining Freedom Phalanx intends to bring Wade in for all the crimes he has committed. Will Statesman be found? Will Darrin Wade's true motivations be uncovered before it is too late? 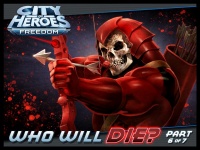 Reeling from the loss of its leader, a member of the Freedom Phalanx does the unthinkable. 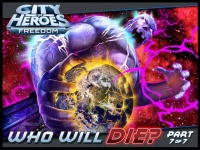 Heroes and Villains unite in the ultimate showdown against the powers of Rularuu.