Aurora Borealis is a hero trainer in Independence Port in the Bell Point neighborhood located north of the Paragon City Monorail station at coordinates (-1634, 0, -5806). Her location is marked on the map as a contact.

Villains face her in the following missions: 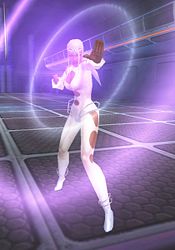 Before the war, Aurora Scott was just a fledgling hero doing her best for the city she loved. Afterwards, she was something else entirely. Aurora played host to Sister Psyche's mind after the Freedom Phalanx heroine was injured in the war. After gladly sacrificing her autonomy so that Sister Psyche could continue to serve, Aurora's just now returning to her own life. And she's got a few bones to pick with the villains who flourished in her absence.

Aurora will say the following when you encounter her:

During the Take down Aurora Borealis mission

Before Combat: "It seems you have a number of severe threats to deal with here. I'm most concerned by the continued successes of..."
Combat Start: "Character!"

During the Defeat Aurora Borealis and allies mission

During the Defeat Aurora Borealis and take the Books mission

Before combat: "These tomes should help the Legacy Chain a great deal."
Combat start:
"You must be Character."
"Infernal said you were pretty tough."
"So let's see if he's right."
First blood: "C'mon. Let's see what you got!"
At 75% Life:
"Jeez."
"Was that your best shot?"
At 50% Life: "If only you attacked your character flaws this hard!"
At 25% Life:
"You've almost won, but I'll tell you a secret:"
"Winning won't help you out as much as you might think."
Upon Defeat: "I'll keep a watch on you, Character. I'll remember this."
Defeated a player:
"All that power wasted on a twerp like you."
"Kinda makes me sad."