This article is about the developer Matt "Positron" Miller. For the signature character Positron, see Positron.

Positron aka Matt Miller is a developer for NCsoft's Paragon Studios. He is currently working on Game Design, focusing on new systems.

Matt Miller started out in the gaming industry in 1993 at Domark Software (which later became Eidos Interactive) as a game tester and phone support. He worked on many titles at Eidos and left in 1999 when he moved to Southern California to work at Prolific Publishing as a producer. Miller joined Cryptic Studios in 2003 as a mission designer and then a systems designer. When Jack Emmert was promoted to Chief Creative Officer of Cryptic, Miller was promoted to Lead Designer. In January 2010, Miller passed the Lead Designer role to Melissa Bianco so he could do more "hands-on" design work on City of Heroes. 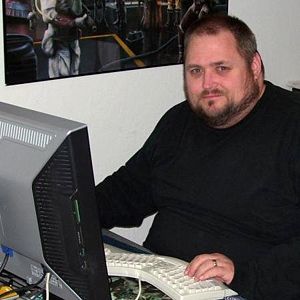 Matt "Positron" Miller, as he appears in The City Scoop

Miller created the Positron character for the Champions Pen & Paper game. When Matt started at Cryptic, he was given an opportunity to place Positron as a signature character into the game.