Lighthouse, whose real name is Alex von Minden, was the Community Relations Manager for the "City Of" franchise. He first joined the staff in October, 2006, and was one of the staff to move over to the new NCsoft-owned studio in November 2007. In November, 2008, Lighthouse announced his resignation and intention to leave NCsoft's employ. He's currently the Community Manager for Mind Control Software.

Previously with Sony Entertainment Online (SOE), was a Game Master (GM) and involved with Everquest.

"I am a long time, avid player of Massively Multiplayer Online (MMO) games and have played both City of Heroes and City of Villains considerably since their respective launches. I’ve followed the games as they have evolved with each issue and update. Also, I am a veteran of MMO support and development, with over 5 years of experience at Sony Online Entertainment where I served in a number of roles, including: customer support, game production and community management." 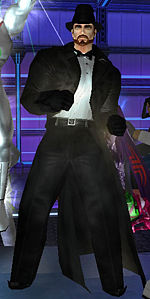 Lighthouse was a bomber pilot, presumably during the Second World War. His plane was shot down by enemy flak. He miraculously survived the explosion, and also the fall to the ground, despite being without a parachute. He takes his name from a lighthouse, near his airbase, that fascinated him.