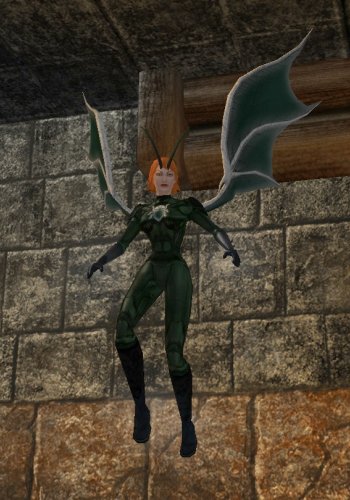 Cricket, as seen at the Halloween Event party on October 31, 2006

Cricket is the forum name of the Associate Community Coordinator for City of Heroes and City of Villains until January 31, 2007. Prior to her promotion to the position, Cricket was a NCsoft Game Master known as GM_Bayla. Cricket was the de facto Community Coordinator in the period of time between CuppaJo's acceptance of the Community Representative for Tabula Rasa and the hire and training of Lighthouse as the Community Relations Manager to replace CuppaJo.

Cricket has been known to appear online and in-game as a level 50 Natural energy/energy Brute by the name of NCsoft_Cricket. She is currently not associated with any supergroup.

Cricket was the first known character to appear in-game with wings, a costume option that was implemented in Issue 8, at a party held on the test server on Halloween night, October 31, 2006. As she explained in a post on the official City of Heroes forums, the developers enabled wings on her character while she was visiting Cryptic Studios just before the event.

On Friday, January 19, 2007, Cricket announced that she would be leaving her position as Community Coordinator for City of Heroes, but remaining with NCsoft to work with the Auto Assault, Exteel, Dungeon Runners and/or Lineage communities.[1]

Unfortunately, due to problems with the training room (test server), Cricket's going away bash on the 30th of January was at first pushed back to the 31st, then later canceled as the problems persisted.

Cricket was succeeded as Community Coordinator of City of Heroes and City of Villains by Ex Libris.