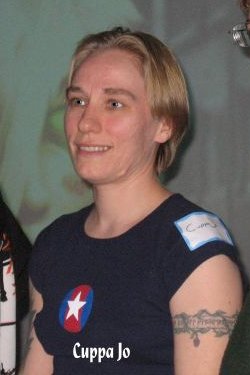 CuppaJo has also been known to appear online and in-game as a level 50 Mutation Blaster by the same name in a supergroup named "Cuppa Clones". Her in-game biography reads as follows:

Joan Coppola was born in Newport, Rhode Island in 1968, and she eventually earned a spot in Paragon University's prestigious medical school. While studying there, she was exposed to an experimental derivative of caffeine while volunteering for a medical study. The drug greatly showed down her perception of time, letting her both move and think at twice the normal rate, and gave her the ability to drain metabolic energy from others with a touch.
In 1989 she joined the Freedom Corps, Paragon City's premiere hero team, under the name 'CuppaJo.' She stayed with the group for seven years, earning no small amount of fame as she took down villains with her accelerated reflexes and wit. She also used her salary from the Corps and her newfound mental speed to breeze through her studies, earning her MD in 1993. When a hip injury forced her to retire in 1996, she turned to politics, easily using her fame and quick thinking to become governor of Rhode Island.

The character makes a cameo in Atlas Park in City of Heroes (Top Cow) Issue 20.

On August 7, 2006, CuppaJo announced that as of September 1, she would be taking over community management of Tabula Rasa, another NCsoft MMORPG, and would no longer be involved with community management for City of Heroes or City of Villains. In response, many of the highly active forum members changed their forum names to CuppaName. CuppaJo was succeeded as Community Manager of City of Heroes and City of Villains by Cricket.