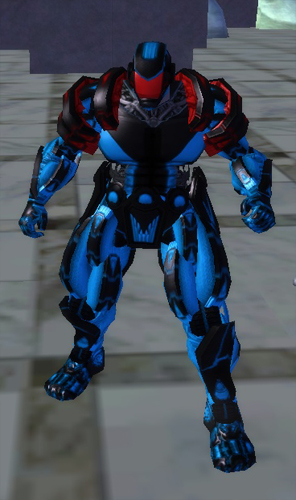 Freitag, whose real name is Kevin Callanan, was upgraded to Red Name status on April 27, 2011. He is a moderator, mainly assisting with the German boards. He also pilots the generic "Moderator 13", which does not appear in the Community Digest.

Freitag has been known to appear in-game as a level 50 (+8) Technology electric/electric Tanker by the name of NCsoft_Freitag. He is currently not associated with any supergroup.

Shortly after the official announcement that Paragon Studios would be closing, Freitag made the following announcement in-game (this from the Virtue server):

Hello everyone!
I know it's late, but I wanted to take a moment to say a few words to you here in-game...
So for those of you who are not aware, Paragon Studios was closed on Friday (I'm not sure what time zone you all are in)...
I just wanted to come here, and tell you guys how amazing you all are. If there ever was a great community to work with, it's you guys.
Words cannot express the honor, joy, and gratitude I, and everyone else at Paragon Studios feels toward you guys.
You guys made the impossible possible. You guided us, your creativity inspired us, and your passion drove us to new heights.
I know you guys are upset, and we're really sad too. I can't answer the questions you guys have, but hopefully someone soon will be able to answer them.
But I want you all to know that this is not what we wanted. City of Heroes ... you guys, our players, are really special to us.
I know that I, and everyone who has worked on City of Heroes for the last ten years, from the oldest hands to the newest hires, are truly honored to have been part of this amazing journey.
Thank you all very much for your kind words: here in game, on the forums, on Facebook, Google+ and Twitter. The outpouring of love, support, and kindness has made this horrible day a little bit easier for all of us.
I speak for all of us here at Paragon Studios when I say:
YOU GUYS FREAKING ROCK AND YOU'RE THE BEST COMMUNITY THERE IS!!!!!!
Everyone who has played or worked on City of Heroes and in Paragon has been touched in some way, big or small. Every bit of that which you add to this world is an essential part of the whole, and we would be poorer without it.
The memories will never go away. Focus on the wonderful things that happened over the last ten years. The amazing people who you've met and played with in this game, and the wonderful experiences you have had.
I would like to go say a few words on some other servers now, but thank you all for listening.