This article is about the designer, David Nakayama. For the signature character, see Noble Savage. 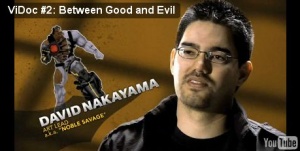 Noble Savage, whose real name is David Nakayama, is an illustrator who penciled most of the City of Heroes comic during the run of Top Cow Comics.

He then joined Paragon Studios as a concept artist [1], and on March 18, 2010, was promoted to Art Lead. On July 9, 2010, he changed his forum name from David Nakayama to Noble Savage, officially adopting a Signature Character, who would be introduced in-game with Going Rogue.