Issue 19, Alpha Strike!, was a major revision to City of Heroes and City of Villains. The title references the Alpha Strike Task Force, which is one of the ways Level 50 characters could make themselves more powerful with the Incarnate System.

This article summarizes some of the major features in Issue 19. For more complete details, see the release date's patch notes. 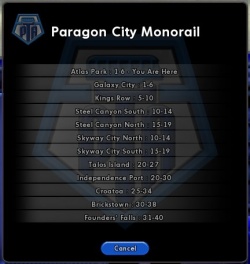 Issue 19 includes two free auras for all City of Heroes players. These auras are customizable.

Challenges already await new Incarnates. The Praetorians have begun their invasion of Primal Earth. Protecting Paragon City and the Rogue Isles from such overwhelming forces requires the greatest Heroes and Villains to work together. Two familiar faces will help in stopping the invasion: Apex and Tin Mage.

Return of an Old Task Force

The Fitness power pool is now an inherent power pool available to all new and existing characters starting from Level 1. Players can freely choose between any or all of the Fitness powers for available character power slots. These powers can be slotted and will accept the appropriate Enhancements.