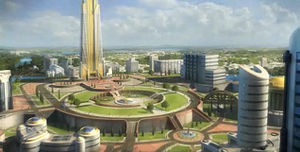 A character may start at Level 1 in Praetoria. During the course of its career, they will choose to assist The Resistance or the Loyalists. Neither the Resistance, nor the Loyalists equate to "good" or "evil", but are more a matter of "us" versus "them" than the "hero" versus "villain" which is typical throughout Paragon City and the Rogue Isles. The character will be presented with the opportunity to switch which side they fight for at key points in the story. They even have the opportunity to go "undercover".

The Resistance alignment and Loyalists alignment each have two factions within them.

Arguments can be made to compare the various factions of the two Praetorian alignments to Primal Earth alignments. Each Praetorian faction has similarities to more than one Primal alignment. The only time the game makes a distinction between them is for the Valentine's Event, which treats both of the Resistance factions as Heroes and both Loyalist factions as Villains.

Warden
The Wardens, while opposed to Cole, hold life to be valuable. They make every attempt to reach their goals with as little loss of life as possible. This is not to say that they will not kill, but for the Wardens it is more of a last resort.

Crusader
The Crusaders are more extreme than the Wardens. They believe in winning the fight at any cost, regardless of how many lives it costs. Many of The Crusaders are motivated by revenge, others simply see killing as a means to an end. Most of them believe that they are fighting for a good cause and do not view themselves as evil, but some of them care little about the true cause of the Resistance, and use it merely as an excuse to wreak havoc.

Responsibility
Those Loyalists who follow the path of Responsibility support Cole, but do everything they can to protect the citizens of Praetoria in the process. They believe in maintaining law and order within the city, but they do not abuse their power. They tend to be selfless for the most part and represent the idea that not everyone with The Loyalists is bad.

Power
Those Loyalists who follow the path of Power support Cole and all that he stands for, however they use their positions to gain more power, prestige, fame, and fortune for themselves. Much like The Crusaders, they hold life to be of little value, especially the lives of members of The Resistance. If there is something to be gained from it, they will not hesitate to kill, and will not lose any sleep over "collateral damage".

The moral choices made up to this point will have no impact on the character's final choice of alignment after leaving Praetoria. Regardless of whether the player followed the Wardens, Crusaders, Power, Responsibility or a combination of these, he or she will be able to choose to be either a hero or a villain.