This article is about the zone. For the organization, see Menders of Ouroboros. 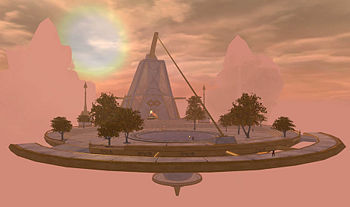 The headquarters of the mysterious Menders of Ouroboros. Heroes and villains can both visit this zone, but they appear in different instances, with differences in some contact missions. There are missions and Task Forces here, as well as the Flashback system. The available TFs and flashback missions/arcs vary with a player's alignment and level.

An Ouroboros is the symbol of the dragon eating its own tail, which has existed for centuries throughout Norse, Greek, African, Hindu, and many other systems of mythology. It is also a central image throughout the novel "The Worm Ouroboros" by E.R. Eddison.

There are no neighborhoods explicitly marked on the Ouroboros map. However, the following music will play in the background while in the zone.