Issue 14, titled Architect, was a major revision to City of Heroes and City of Villains, released on Wednesday, April 8, 2009. The title refers to the Mission Architect, which was originally slated to be a part of Issue 13.

This article summarizes some of the major features in Issue 14. For more complete details, see the release date's patch notes.

First the City of Heroes Character Creator set a new standard for player creation and customization. Now, Issue 14 takes another giant step, allowing players to design their own missions and story arcs to share with the entire City of Heroes community. Using an intuitive interface similar to the game's detailed Character Creator, players can create missions from the ground up. Players will determine details ranging from environments, mission objectives, and enemies, to written fiction and character dialogue; giving their stories nearly infinite depth and personalization.

Among other rewards, authors and architects who create the most extraordinary content will garner acclaim and reputation. Community feedback will be paramount and some missions will elevate in status unlocking new rewards and benefits for their creators. 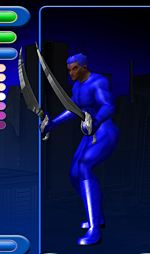