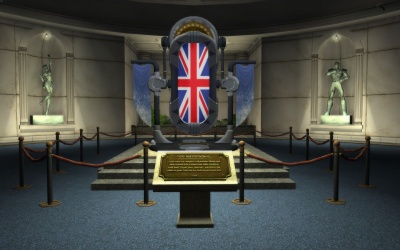 Omega Team's Time Capsule, inside the Paragon City City Hall. The plaque reads: "When Hero 1 and the rest of the Omega Team accepted their mission to the Rikti home dimension, they knew they likely wouldn't be coming back. They put together this time capsule to hold items of personal importance to themselves. The items are simple things: letter to their children, old high school photos, things to help people remember who they were. This time capsule has been preserved as a memorial to their sacrifice."

The Omega Team was one of two teams formed to fight the Rikti War in a daring plan known as the Alpha and Omega Gambit, devised by Dr. Science. The team consisted of a mixture of 50 heroes and villains, mainly magicians and people wielding artifacts, led by Hero 1. While Statesman's Alpha Team launched a frontal assault on the Rikti invaders, the Omega Team waited while invisible until the portal to the Rikti homeworld was clear. Once it was, the team ran through to close the portal to Earth once and for all from the other side. After a tremendous explosion, the portal was shut down, but at the cost of the presumed loss of all but one member of the Omega Team: the hero Ajax, who was caught in a Rikti stasis ray before he was able to run through the portal.

The Omega Team seemed to have vanished, but had left behind a legacy: Hero 1, together with the Omega Team, made a time capsule. The city plans to open it on the seventh anniversary of the heroes' sacrifice, November 27, 2009, seven years after the end of the Rikti War.

Another monument which commemorates the bravery of the Omega Team is the flag which flies on top of City Hall in Atlas Park, crafted from Statesman's cape to honor the sacrifice made by Hero 1 and the rest of the Omega Team. A badge exists to commemorate this sacrifice.

Recently, a couple of additional survivors have found their way back to Earth: Glacia and Infernia. After spending years in the Rikti Homeworld, the two sisters managed to come back by sneaking into a transport that finally brought them back. The knowledge about the Rikti and their homeworld they may have gained during these years is expected to be very valuable.

The final fate of the rest of the Omega Team, though, remains a mystery, except for a new warrior within the Rikti ranks... 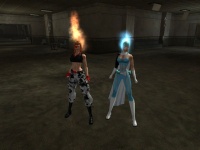 The capsule was opened on November 27, 2009. The following letters were found inside: