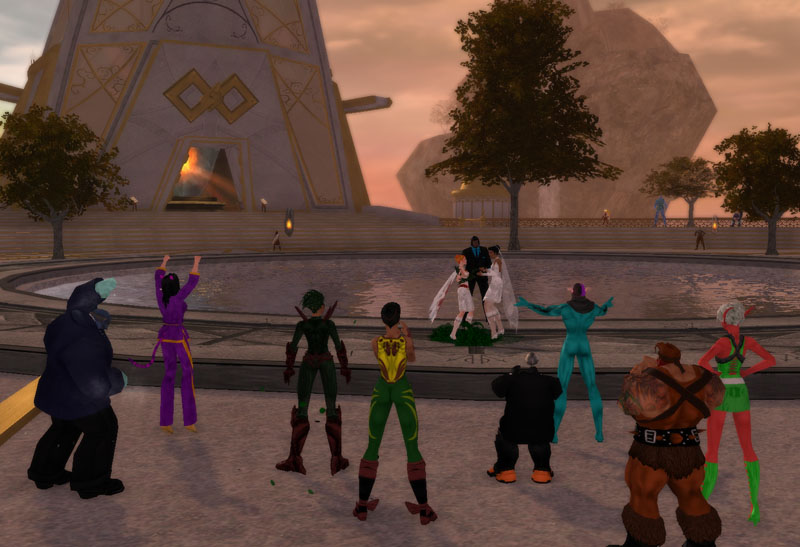 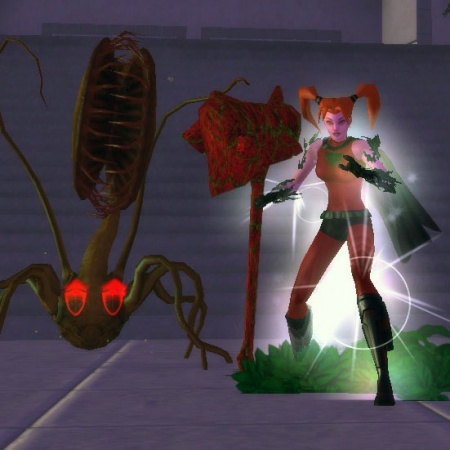 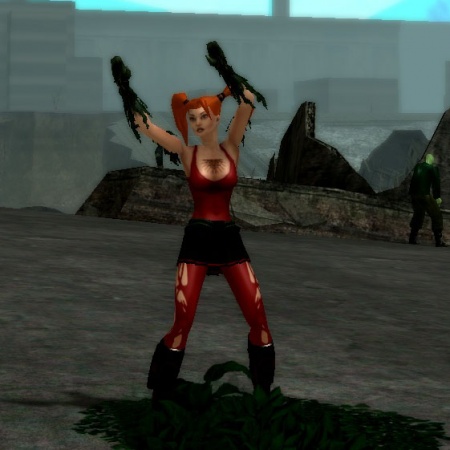 University biochem student Ann Traverse followed a squirrel under an unusual tree in the arboretum. Tripping on an exposed root, she found her left arm had been scratched by the bark and some sap had entered the wound. She vowed to fight crime as Michigan Cherry! Since beginning her career in Paragon City, Michigan Cherry has fought all manner of criminal groups, but she finds the most satisfaction in fighting the Devouring Earth, who use their earth-based powers for evil, and in fighting the corrupt Crey corporation, who abuse their scientific achievements.

On November 15, 2012, Michigan Cherry proposed to her longtime girlfriend Shayma Bouazizi, the newly ascended Incarnate known as Quadripole. Looking into an uncertain future, the two were married in Ouroboros later that day. 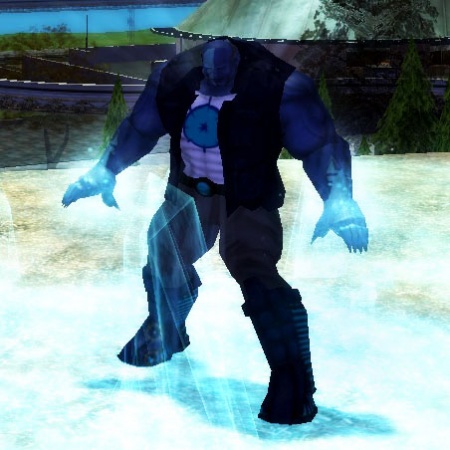 Jens Jørgensen was the first child born in Antarctica. Soon after his birth, however, the U.S. government received a distress call from the base. After two weeks without further word from the base, a government team arrived and found the base destroyed by an unknown force, leaving Cold State as the only survivor. Cold State spent the rest of his life under government study, finally ending up in a lab in Galaxy City, where scientists finally discovered the mutagen that allowed him to thrive in the harsh Antarctic climate just before the meteor strikes would set him free.

After escaping Galaxy, Cold State headed to the Rogue Isles believing evil to be his only option. However, a trip to Praetoria's First Ward and his experience there with Noble Savage convinced him otherwise. 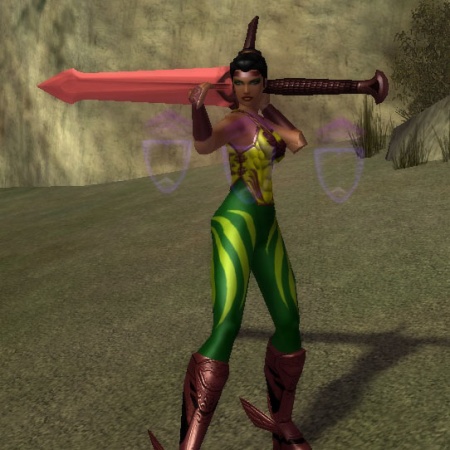 Beatrice Arturi discover a cache of copper artifacts in her late grandmother's belongings. Their origin at first remained a mystery--the two most plausible theories seemed to be magic and alien technology--but they seemed to have unusual properties which gave her strength, speed, and agility beyond that of a normal human. When the Midnighter Club sent her to Cimerora, Cypria finally began to uncover the origins of her equipment and received the armor that was forged alongside it. Though her Cyprium Sword was obviously reforged sometime in the Industrial Age, Cypria was eventually able to obtain the original from Cimerora around the time of Tyrant's defeat. 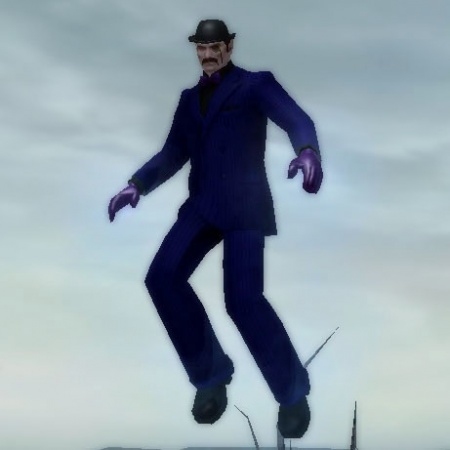 Dandyman is above you, but he's not above proving it. 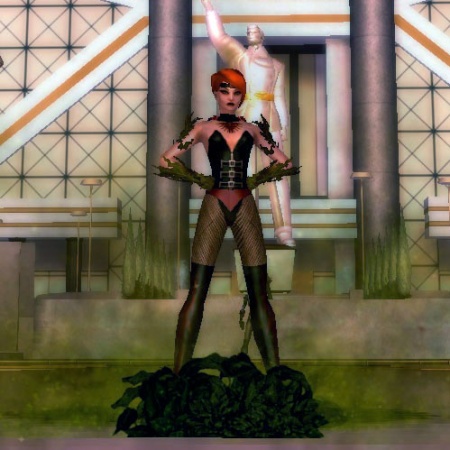 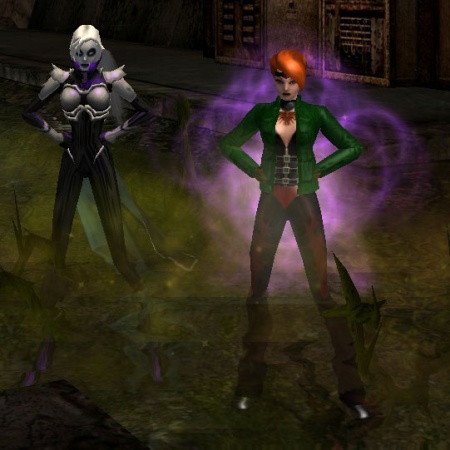 Somewhere on Praetorian Earth, University biochemistry student Ann Traverse was attempting to capture a squirrel when she tripped on the root of an unusual tree, scraping her right arm on its bark and allowing its sap to mix with her blood. Within a few days, she found herself able to create and control plant life and natural toxins. Over the course of her career, she has experimented with these toxins to gain speed and agility and unlock latent psychic abilities. Tart Cherry used her powers to move up Praetoria's power structure. Upon arriving on Primal Earth, she attempted to do the same, but found the heroes annoyingly altruistic and the villains lacking subtlety. She now travels between Paragon and the Rogue Isles, gaining prestige in the former while working toward her own ends in the latter.


Biomedical engineer with a love for crimefighting. Michigan Cherry's wife. 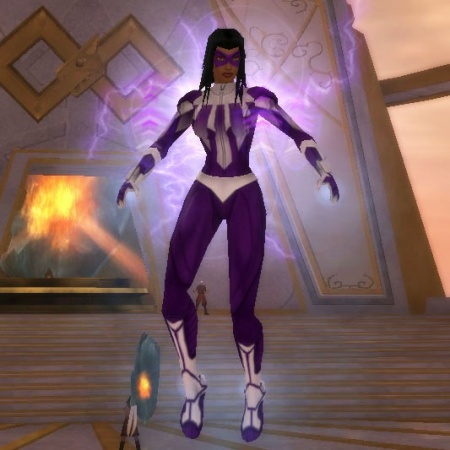 Biomedical engineer Shayma Bouazizi designed a suit to use electromagnetic forces to fight crime while protecting the user and his or her teammates. Due to lack of funding, however, she decided to test it herself and discovered fighting crime to be her true calling. While she still intends to release the suit to the police market, she has no objection to a long "development phase."

On November 15, 2012, after becoming an Incarnate, Quadripole was proposed to by Ann Traverse, her longtime girlfriend and fellow Incarnate more widely known as Michigan Cherry. Looking into an uncertain future, the two were married in Ouroboros later that day.


City councilman caught up in scandal; now a leader of animals. 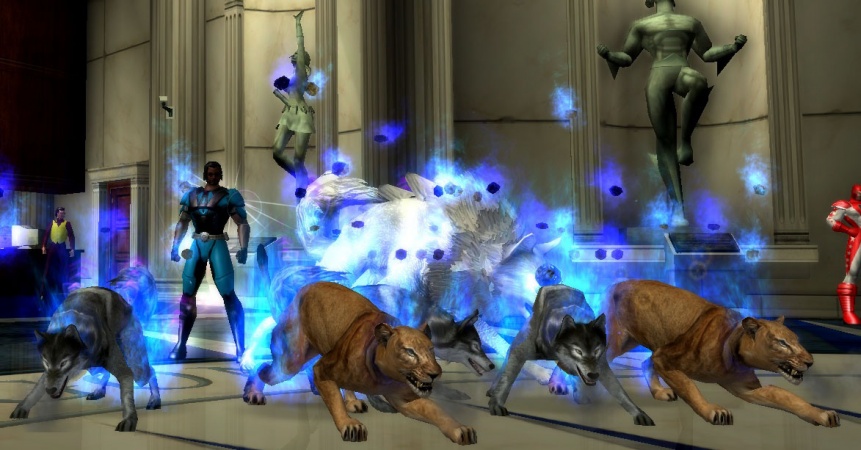 Mark Leicester always had a "warm personality," but it wasn't until his college years that he discovered his natural leadership abilities came along with heat generation and healing abilities. He set those abilities aside, however, as he worked in his community and was elected to the city council, where he earned the nickname "Blue Bison" for his defense of civil liberties. An insider trading scandal among his staff, however, forced him to resign, and he turned his leadership abilities in an unusual direction, finding he was also effective in leading animals and, in doing so, serving his city in a different way.


Stranded native of an alternate Mars. 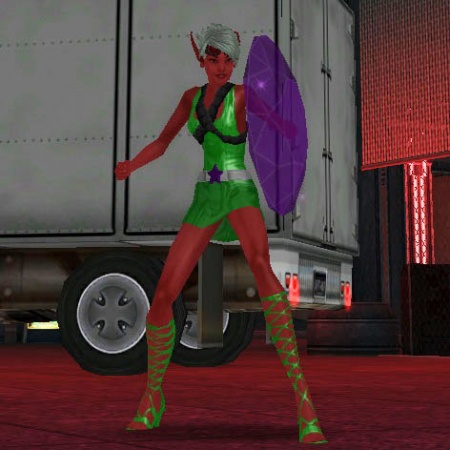 Amelentha hails from an alternate universe where life first arose on Mars instead of Earth. The Martians eventually colonized Earth for its mineral resources, but a teleporter accident sent Amelentha from her native Mars to the wrong Earth. Here, she fights crime while attempting to find her way home.

Asteroid Amy has recently been seen working with Portal Corporation scientists searching for another dimension that might lead her home.


1920s starlet with a voice for silent films. 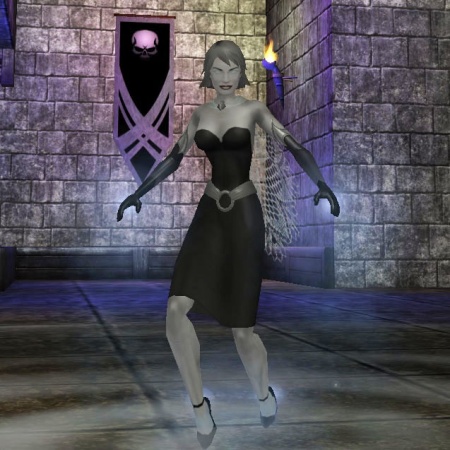 Myrtle O'Hara was one of the brightest stars of 1920s American silent films. By the end of the decade, however, "talkies" were rapidly coming to dominate the American film landscape. Directors wished O'Hara well, but behind her back they admitted she had "a voice made for silent pictures." To make matters worse, despite her young age, O'Hara felt her looks were already fading. O'Hara spent the next decade and a half looking for a solution, and she believed she had finally found one in an obscure dark magic ritual from the British Isles. She traveled there and found some mystics willing to perform the ritual, but the first Axis strike on London caught them by surprise. The ritual was disrupted and, as a side effect of the ritual's time manipulation, O'Hara fell into a coma for many years. When she awoke, she found that the ritual had kept her young, but the other effects were not as planned. Her entire body had lost its color, and her voice was now only a screech.

Stormy the Penguin, a.k.a. "Stormy" 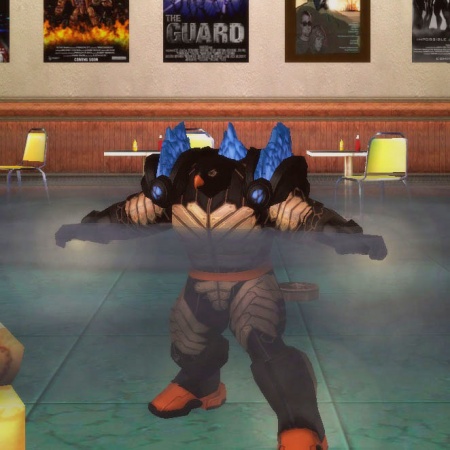 "Stormy" is a hyperintelligent Adélie penguin. Coming of age on Ross Island, of the coast of Antarctica, Stormy hopped aboard a passing exploration vessel to escape the doldrums of life with the average penguins around him. He stowed away below decks, but his presence was revealed when he was forced to make emergency repairs to a hull breach during a violent storm. The crew took him in and gave him the nickname "Stormy," a moniker which he at first disliked, but which slowly grew on him. Since arriving in the United States, Stormy has worked with the government to develop advanced technology. His latest project is ARCTICA, the Atmospheric Rapid Condensor Temperature Inversion Combat Armor. 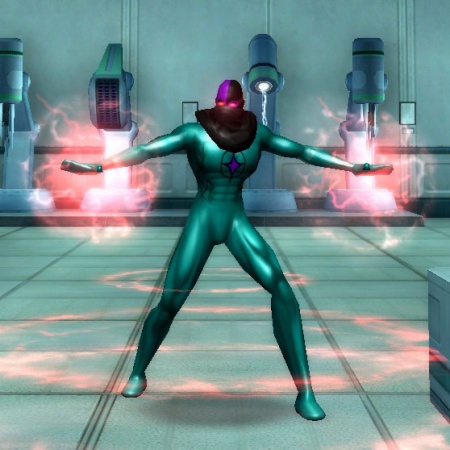 Following regimen of treatments A422, A191, and F560, subject exhibits control over energy similar to other subjects in the same treatment pool (see profiles: Subject 1250.08; 1250.39; 1250.71). However, some observers have noted an additional ability to control a poorly understood form of energy, known as "negative energy," that has not been observed in any test subject to date. 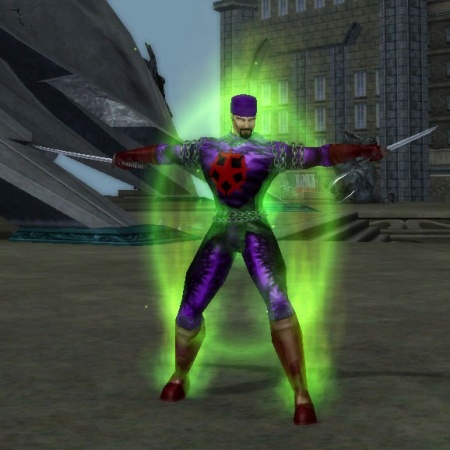 Taiga Sakai's inherent ability to control fire gave him a unique perspective on his lifelong passion: cooking. Sakai worked his way up in Japan's culinary world and finally opened his first restaurant in Japan. While it opened to much fanfare and top-notch reviews, one prestigious journal failed to give his restaurant the star rating he believed it deserves. In a fit of rage, he attacked his staff, wielding his chef's knives as weapons. That day, Sakai found he had a new lifelong passion: revenge.


Creation of, and traitor to, the Praetorian Hamidon. 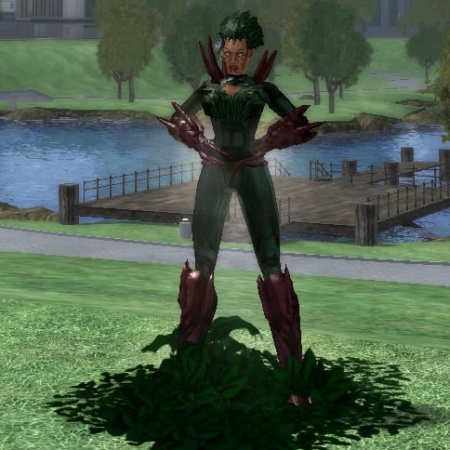 Greyfleur was created by the Hamidon in an effort to infiltrate and destabilize Emperor Cole's regime. Infusing dark magic into an altered human genome, the Hamidon attempted to create a creature that could "fit in" with the regime's Powers Division but remain loyal to the Hamidon. Unfortunately for the Hamidon, his creation turned out to be all too human, and she immediately switched loyalties, committing herself neither to the Hamidon nor Cole, but to the good of the Praetorian people. 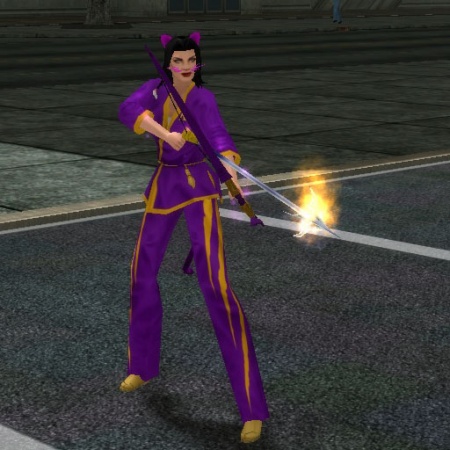 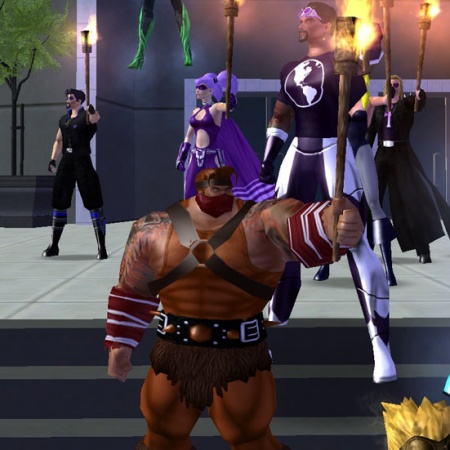