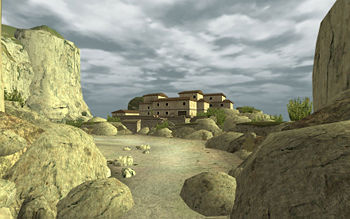 Players step foot upon the ancient land of the Roman Cimeroran Peninsula, where they battle deadly creatures, defend an ancient city and ultimately come face to face with the enemy of time itself. Throughout this journey players uncover the mysteries of power and the origins that guide them today.

Cimerora itself is a peninsula in the ancient Mediterranean that was formerly controlled by the King/Emperor Imperious. However somewhat in its recent ancient history, one of Imperious' men named Romulus Augustus usurped power from Imperious and took the throne for himself. Using powers and aid from an unknown dark entity, Romulus has summoned ancient beasts, legions of men, and erected a single great fort over the majority of the land where he plans to constantly strike against the gallant Imperious.

If you attempt to enter Cimerora before reaching level 35, you receive the following message:

Julia buys back all enhancements (except Invented Enhancements) as if she were the same origin as the enhancement, maximizing the sell-back price.

There are no neighborhoods explicitly marked on the Cimerora map. However, there are a few areas that are recognized as being different.

Cimeroran Traitors, led by Romulus Augustus are mainly concentrated up in the north, though they lurk all over the entire map. They do not like either Heroes or Villains, and will engage in battle with them if close enough or provoked. Their arch-enemies are the Cimerorans led by Imperious, and are frequently sighted battling them.

Defeating 100 Cimeroran Traitors anywhere in Cimerora will net the attackers the Centurion Badge.

Cimerorans come as both civilian and soldiers. The soldiers can be seen on guard at specific sites such as the ones guarding Imperious or at the bridge leading to the fortress in the north. They can also be found on patrol, and will engage in combat with Cimeroran Traitors if sighted. They con as Ally to both Heroes and Villains.