Base Rooms are expansions that can be added to Base Plots by a character with Base Editing Rights. 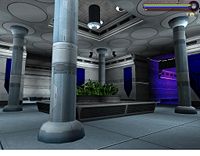 Each of the Base Rooms has a specific function and will only allow Base Items of specific types to be placed within them. For instance, you have to have an Energy Room if you want to have a Generator, and you must have a Control Room in order to generate Control. Both Energy and Control are necessary to build and run any of the cool toys in a Base. Without them, your Base is largely decorative.

Some rooms can house Defensive Items in addition to Energy, Control, Medical, Teleportation, or Work Table Base Items. Some rooms can also have backup batteries should the Base's main power sources become disabled during a PvP raid.

All Base Rooms added to Base Plots must have a single grid space between them for the automatic placement of Doorways by the Base Editor interface.

Most rooms have a certain function while others can simply be for decoration in a base. For instance, a medical bay can be used to revive dead players at the Supergroup base. If a med bay with a working drone is active, players can press "Go to Supergroup Base" and it will revive them in the Med bay. However, for most functions to work, you need a control room with an active generator.