Manticore and Sister Psyche kicked off the event by having a wedding on the training server. On February 14th starting at 3:00pm PST (6:00pm EST), the wedding was performed live, repeating for the next three hours, but was only available to 100 players (50 heroes, 50 villains) at a time.

Also starting on February 14th, the Spring Fling event returned, hosted by DJ Zero in Pocket D. Heroes also were sent on a special wedding reconnaissance mission by Sela Vermont, while villains were sent off on their own nefarious mission involving Zev Scalamore. This event officially ended on February 28th at 8:59pm PST (11:59pm EST).

The wedding took place in a modified version of the Ouroboros Citadel:

At 6:20pm Eastern on the Training Room server, a special role-played wedding ceremony began in Ouroboros in which Manticore and Sister Psyche got married. Below is a complete transcript of the ceremony:

At this point, Lord Recluse showed up, and attacked with a group of villains:

Lord Recluse: Oh... how touching. The Freedom Phalanx thinks they can seclude themselves away and have a nice private ceremony. Well, not if I have anything to say about it!
Lord Recluse: Villains! Minions of Arachnos! Follow me to victory!
Sister Psyche: I just KNEW you couldn't let me have this day to myself, Recluse!
Manticore: Heroes! Let's take these punks down so I can get on with my honeymoon!

A battle ensued, with signature heroes and villains fighting alongside attendees—and crashers—of the wedding.

Manticore was portrayed by Sean Dornan-Fish, who posts as Manticore on the official forums and has appeared as Manticore in the game previously. Sister Psyche was portrayed by Sean's wife, Jennifer Dornan-Fish. Many developers and representatives attended the wedding, including Positron, Lighthouse, Ex Libris, Back Alley Brawler, Citadel (portrayed by developer pohsyb), Synapse, War Witch, Ghost Falcon, and Dark Watcher. The event was closely monitored for griefers, and those who violated requests not to use the broadcast and request channel and those who walked onto the platform were immediately dropped from the zone.

After the wedding, heroes and villains congregated in Pocket D for a party.

For the duration of the Valentine's event, heroes can find Sela Vermont the wedding coordinator standing in Atlas Park Plaza near Ms. Liberty. Talking to her will assign a mission to retrieve seven stolen wedding presents from an Arachnos warehouse.

Likewise, villains can find Zev Scalamore standing near the Fateweaver on Mercy Island. Zev will offer a chance to steal the same presents.

Both missions merely require that all seven crates be opened, and they can be stealthed. The missions are available to all levels, but can only be run once per character. No special badge or reward is offered for completing either mission. 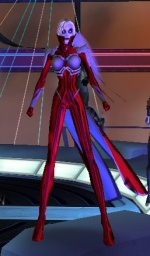 Characters had to be in the final mission of both arcs long enough to get credit for completing those two missions in order to acquire the Handsome(male)/Beautiful(female) badge. The Handsome/Beautiful badge granted the temporary power of Nectar, a 20-use targeted area of effect confuse and placate.

Strategies for Snaptooth and difficult missions