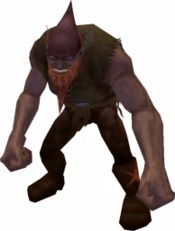 Snaptooth is an Elite Boss for the Red Caps.

He appears during the Valentine's Events on a mission from DJ Zero.

When you face him, you have to defeat him three times and he becomes stronger as you fight him. He starts as a lieutenant and once defeated, disappears into the ground and reappears as a boss. He repeats this upon his second defeat and comes back as an Elite Boss. During the fight, Red Cap minions come to aid his cause.

He also appears during the Winter Events on a mission from Father Time.

This time, you must save Baby New Year from him. In this mission, he does not progress through ranks, spawning as an Elite Boss, nor do reinforcements come to assist.

Snaptooth is a particularly nasty Red Cap that takes even more glee in torment and suffering than the rest of his kin. Clever and devious, he has found a way to hop across dimensions using the faerie rings in Croatoa. Now he can bring his wicked games anywhere he pleases.