An Arbiter ready to fight

The Arbiters are the highest ranking troops in Arachnos. They are linked directly to Lord Recluse, and any attempt to harm one is considered a challenge to Lord Recluse himself.

Arbiters are in charge of keeping things orderly for Lord Recluse, and oversee most everything that goes on within Arachnos. They are said to be above factionalism. That is, they never attack Destined Ones, nor each other. Arbiters are also capable of independent action and experimentation: several of Arachnos' technologies, such as the Power Mace, have spawned from the work of an Arbiter or a group of Arbiters, who are remarked to have scoffed at the simplistic name given to it. They have powers on par with Lord Recluse in terms of influence, able to order the death of anyone below them with but a word, and are one of the highest authorities the Arachnos organization has aside from Lord Recluse himself. Even the Dark Lord's lieutenants are said to be at least somewhat subservient to the Arbiter's wills if the need is called.

Arbiters are usually referred to by name, perhaps symbolizing their importance. Arbiters may be male (as are the majority of Arbiters seen within the game) or female (one such example being in Seer Marino's storyarc, as well as in Grandville). Presumably, Fortunata Fateweavers are equal in power, and both only answer to Lord Recluse. The basic male Arbiter uniform is a white-on-white (on higher graphical settings, shiny-silver) version of the Wolf Spider Huntsman uniform with a turquoise cape that bears the Arachnos emblem, distinguishing them greatly from all other Arachnos personnel. For female Arbiters, they wear an identical costume to Fortunata Fateweavers, which in turn is a white-on-white (or shiny-silver on higher settings) version of the Night Widow or the Fortunata Mistress.

The duty of an Arbiter seems to be quite simple: to keep Arachnos from falling, by any means. Arachnos is subdivided into factions, mainly led by Lord Recluse's four lieutenants: Scirocco, Ghost Widow, Black Scorpion, and Captain Mako. These factions continually squabble among one another, and although Lord Recluse has no problem with competition within his organization, he isn't fool enough to believe he should allow it to run rampant. For this, he gives the Arbiters the power and authority to stop this infighting if it grows too vicious. Arbiters may do this by any means they see fit, but failure is not an option; personally dealing with the problem, sending in subordinates, introducing other groups, and even using the Dark Lord's 'Destined Ones' are all legal devices the Arbiters may and do use.

Arbiters generally function as Trainers for players in City of Villains. Some zones have more than one. In-game, other non-interactive Arbiters are seen guarding Forts, such as Fort Darwin in Mercy island, and being the 'welcoming committee' to immigrants attempting to enter Grandville. Arbiters may also be responsible for selling Enhancements of all origins to players, due to the Quartermasters wearing Arbiter clothing, something which probably would not be permitted for non-Arbiters to wear.

Aside from Arbiter Sands, a renowned radical Arbiter, no other Arbiters was ever seen in combat, though another Arbiter was killed by a group of renegade Arachnos in Seer Marino's storyarc, and the full might of Arachnos was brought down upon them. 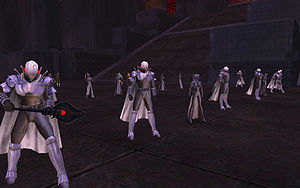 Male and female Arbiters in Grandville.