In an organization with as many unique individuals as Arachnos, conflicts are bound to arise. Arbiter Leery is one of those people empowered to deal with these conflicts. Leery spends most of his time collecting information about disputes, weighing the evidence, and making decisions about how to resolve them. Once he's made his decision, all Arachnos operatives are duty bound to comply with it. Of course, that doesn't mean they always will.

As an arbiter, I handle the disputes between Arachnos faction leaders. I only work with those individuals who have proven they are the best. You have not done so. Seek out the demons who walk this isle, Sparcetriel and Trepsarciel. They can show you the way to greatness.

Yes, I have jobs for you. But I'd like to see you get to Threat Level 35 first.

I have heard a lot about you. Many of the things you've done have met with disapproval from Lord Recluse himself. Nevertheless, you've shown you're a person with real power. If you obey my directives, it will go a long way toward restoring you to Arachnos' good graces. Does that sound appealing?

You're too busy to be handling official Arachnos business.

I have nothing I can't deal with on my own.

You're doing well, Character. Keep it up, and Arachnos may be convinced to forgive your past transgressions. Here, take my personal communication codes. You may help yourself to a greater selection of Enhancements.

I'm impressed. You've proven you'd make a fine member of Arachnos. Keep up the good work. You must have the very best Enhancements.

You took this trophy after defeating Indigo in an adventure you like to think of as:

It began with a battle between Captain Mako and Black Scorpion. Both had sent their men to confiscate a shipment of arms bound for Nerva Archipelago. A polite interrogation of the combatants revealed that each man believed the other planned to use the weapons against him.

Leery was determined to bring the conflict to a swift resolution. He ordered you to capture Mako and Black Scorpion's assistants, and to bring them to his bargaining table. Having official license to take down highly ranked operatives was a treat, and you defeated Operative Unger and the Tarantula Wren with ease.

Leery interrogated the captured operatives, and found that each had been lulled into suspicion of the information Unger and Wren provided, Leery tracked this individual and sent you to dispose of her. Indigo fought well, but ultimately was no match for your powers. The war between Black Scorpion and Captain Mako has been quelled, for now, and your stock in Arachnos is only rising. It can't be long before Recluse himself is forced to sit up and take notice of you.

I've got a tense situation brewing, Character. I've just been alerted to a battle going on between Captain Mako's men and those of Black Scorpion. I don't know what they're fighting over, but I know it's going to stop. Now.

Every single operative there had better remember this day, Character. Give them all a lesson.

The sounds of battle ring off the rafters.

You defeated the battling operatives, and learned the reason for their feud.

Arachnos
Note: Enemies will consist of the subgroups Crab Spiders and Tarantulas only.

So, Black Scorpion and Mako each think the other's out to get them. Hmm. I'm not sure whose hand is behind this, but you're going to find out.

Capture the servants of Mako and Black Scorpion

Mako has charged his lieutenant, Operative Unger, with carrying out this war against Black Scorpion. You'll find Unger in Sharkhead, most likely.

Note: Despite what Arbiter Leery said, Operative Unger is actually in Nerva Archipelago.

Having official license to beat down Arachnos higher-ups is so liberating.

Arachnos
Note: Enemies will consist of the subgroup Crab Spiders only.

Before combat: "All I know is, if Mako says go after Black Scorpion, I go."
Combat start: "Hey! Who are you to tell me what to do?"

Black Scorpion has put his battles with Mako in the hands of a Tarantula known as Wren. Get her!

Wren ought to go down as easily as Operative Unger.

Arachnos
Note: Enemies will consist of the subgroup Tarantulas only.

Before combat: needs data
Combat start: "I see. Another of Leery's pets."

I'll sit down with these two ladies and have a pleasant little chat. No doubt I can uncover the reason for their masters' strife.

After much lengthy talk, I have managed to get the truth from Wren and Operative Unger. It seems a certain someone contacted both of them, claiming to be a defector from the opposite camp. This person sold Wren on the idea that Mako planned to murder Black Scorpion, and also convinced Unger that Black Scorpion had it in for Captain Mako. If we can unmask this person, we can end this conflict. Character, I must warn you: all the indications point to this individual being quite formidable. If I were you, I wouldn't go in alone. And on top of that, we'll be on a time table here. You'll only have 75 minutes to complete this task, so I suggest finding allies before you begin the operation. 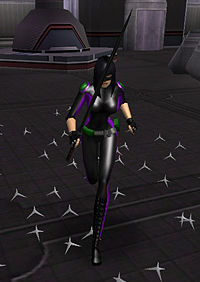 Based on the information Wren and Unger gave me, I've tracked the individual in question to a cavern network on Primeva. And Character, I must stress again: all the indications point to this individual being quite formidable.

I want the person who's setting Black Scorpion and Mako against one another caught. Immediately.

This Longbow base is well hidden from the outside.

Failure - no message given
Success - You defeated Indigo!

Note: If you fail this mission, you will not receive any Souvenir for this Story Arc at all.

No message given, prompts for next mission

Well done, Character. I will spread word of Indigo's defeat to Black Scorpion and Captain Mako. This should quell their fury, for now at least. But you should know: peace never lasts long within Arachnos. Mako is a vicious killer, and Black Scorpion is a paranoid psychopath. It won't take much to drive them into conflict again.

No One Gets It

Souvenir: Tears of the Spirit

This glass flask only contains a few drops of liquid, but if rumors are to be believed, those drops are most powerful. In addition, they're a potent reminder of the adventure you like to call:

No One Gets It

It began when Arbiter Leery informed you of a squabble between Ghost Widow and Scirocco. They were battling over an artifact known as the Tears of the Spirit. First, Leery sent you to abduct a Longbow operative who knew the story behind the tears. When you captured Agent Arthur Castle, he admitted the Tears were an item of awesome power. With the proper incantations, they would allow the desires of any person who drinks them to become real.

It was clear that the Tears had to be taken away from the squabbling Arachnos officers. Arbiter Leery sent you to confiscate them from their current holder, Scirocco. However, when you got there, you found Scirocco's troops embroiled in battle with Ghost Widow's Fortunatas. The Tears had already been taken.

Furious, Arbiter Leery declared that the Tears must be destroyed. He sent you to perform this act, but you tricked him. The Tears of the Spirit remain in your possession. Should you ever discover the proper incantations, your power will know no bounds.

Learn more about the Tears of the Spirit

You've been around the Rogue Isles for a while now, Character, and I'm sure you've seen that even the most deadly villains can be like little children at times. At the present moment, two of my charges are squabbling over a toy. The Tears of the Spirit, to be exact. It's a flask of mystical liquid that's rumored to be older than Christianity. At the moment we don't know much about it, only that Ghost Widow and Scirocco both seem to be willing to squander their troops in a needless battle over it. You know what happens when kids can't share a toy, right? Nobody gets it. But before I send you to confiscate the Tears, we need to know more.

I need you to find a certain Longbow agent. Arthur Castle. According to rumor, he was present in Morocco where the Tears were unearthed six years ago. He's been trying to keep them out of Arachnos hands, so I suspect he knows a little bit about their mystical properties.

I want to know everything Arthur Castle can tell us about the Tears of the Spirit.

Arthur Castle is the commander in charge of this Longbow vesel.

Arthur Castle gasped, 'You have to understand! The Tears must be protected!'

Before combat: "I'm telling you, we have to strike now! Before Scirocco uncovers the Tears' power!"
Combat start: "We've been discovered. Arachnos is after us!"

Arthur Castle is certainly well-informed about the Tears of the Spirit, as well as other matters of interest to Arachnos. Now we know something about the Tears' powers, and we can proceed with proper caution.

Retrieve the Tears of the Spirit from Scirocco

It has become clear that the Tears of the Spirit cannot be allowed to remain in Scirocco's hands. Nor can they go to Ghost Widow. You, Character, are the duly appointed Arachnos representative in charge of retrieving the Tears from Scirocco. Do so without delay.

I hear the Tears are guarded by Scirocco's most trusted servent, Ice Mistral. I recommend that you take a full team with you; if Ice Mistral opposes you, she will not be easily dealt with.

Don't be tempted to drink the tears, Character. Without the proper incantations, they would surely kill you.

We must confiscate the Tears of the Spirit before this conflict grows more bloody.

You hear the crash of a blade and a Fortunata's howl. Ghost Widow's troops are here!

The Tears of the Spirit are gone!

Before combat:
Fortunata: "Give up the Tears!"
Mu Striker: "Never!"

Combat start:
Mu Striker: "No one will take the Tears from Scirocco!"

Before combat:
Fortunata: "We will have the item!"
Mu Striker: "You will die trying!"

Combat start:
Fortunata: "You are not part of this fight!"

Before combat: "I will give up the Tears to no one!"
Combat start: "I will not cede my master's prize to you!"

So, Ghost Widow already has the Tears of the Spirit. Her rash action will only increase Scirocco's fury with her. We must act quickly.

Destroy the Tears of the Spirit

I feared it might come to this. Ghost Widow and Scirocco are at one another's throats. Confiscating the Tears of the Spirit won't be enough, Character! We have to destroy it! I know Ghost Widow will have Wretch guarding her prize. Teach her a lesson by taking him down. You may well need a full team to do so.

Don't fight me on this, Character. You'll lose.

I want the Tears of the Spirit destroyed!

These caverns shake with the sounds of battle.

You have destroyed the case, but stolen the Tears of the Spirit!

Arachnos
Note: Enemies will consist mainly of the subgroup Fortunatas, overwhelming smaller forces of Mu Mystics. A small platoon of Tarantulas and Crab Spiders will be guarding the Tears of the Spirit.

Before Combat:
Mu Striker: "Vile creature! You will obey!"
Fortunata: "We will not give them to you!"

Before combat:
Fortunata: "We have no fear of Scirocco!"
Mu Striker: "You should."

Combat start:
Fortunata: "Get back!"

Tears of the Spirit

Before combat:
Random Arachnos guard: "The Tears must be guarded."

Before combat: needs data
Combat start: "You pay for this!"

Well done, Character. It was a shame to have to destroy an item of such power, but it was worth it if it helps cement the structure upon which Arachnos is built. I imagine I will have more work for you in the future.

Arbiter Leery has no normal missions outside of his Story Arcs.