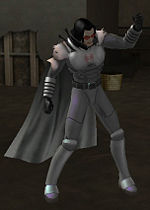 Arbiter Sands is one of the Arbiters of Arachnos. He seems to have learned something about the past events in Faultline, enough to convince Lord Recluse to put him in command of an Arachnos force to explore the zone. He knows that Faultline is hiding something far more powerful than ruined supergroup bases.
Arbiter Sands was the only Arbiter players could fight directly in the game until several were added to alignment missions.

Praetorians may find him in the following missions:

You know, the fact that I had to come down here shows that we're not hiring the go-getters anymore.

See, I thought Praetoria would be great, no annoying 'heroes'. But you're all just called Powers Division here, and you're -just- as annoying.
Rikti bombs fail, occupying the reactor going poorly... this really calls for me to take a nice vacation when we take over Faultline.

Keep Fusionette from getting killed Dialogue

Arbiter Sands: I am an Arbiter. Do you know what that means?
Scrounger Gunner: That you will take longer to convert?
Aberrant Rector: That your conversion is a greater boon?

Scrounger Gunner: Kill the Heretic!
Arbiter Sands: Hmmm. A Hero... This might be fortunate...
Aberrant Rector: Your time is over!

Arbiter Sands: Instead of fighting, perhaps we can help each other?

Before Combat: The answer we seek is somewhere on these premises. Keep looking.
Combat start: Character, right? Are you surprised to see me?
At 75% Life: They did tell you I am an Arbiter, right?

Just wanted to be sure.

At 50% Life: Now, this is altogether unreasonable.
At 25% Life: You seem to lack a sense of self preservation. I'll note that.
Defeated: I think I'm done here. You'll excuse me if I don't stay around.

Stop Arbiter Sands and get the PCM Dialogue

Combat start: Well, this is an unfortunate turn of events
At 75% Life: You've harmed me again. This won't do.
At 50% Life: You are beginning to vex me.

I say that to vey few people.
Most of whom are dead now.

At 25% Life: Normally, I'd teleport to safety now, but that's sadly not possible at the moment.
Defeated: Now this is absolutely bothersome.

During the first mission of the Statesman Task Force:

This time he has his own cutscene:

Combat start: Well, I think I've had just about enough of this.

At 100% Life: I'm a busy man, so if you'd die right now, that will be fine.
At 75% Life: You seem to have harmed me. How importunate.
At 50% Life: I don't recall if I've told you that you vex me.
At 25% Life: Do you people have any idea what this is doing to my schedule?
Defeated: Indeed, you are terribly vexsome.

And I don't say that to many people. 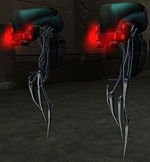