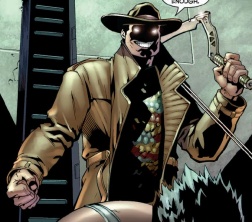 Protean as drawn by David Nakayama

Anton Jaeger, also known as Protean, is an archvillain. He is a shape shifter with the ability to mimic voices as well.

Protean is Manticore's nemesis. He killed Manticore's father (the original Manticore) as well as his mother. Protean also killed the hero Dauntless, Galaxy Girl's sidekick in an attempt to kill everyone that Galaxy Girl had helped.

We learn that Protean can only transform himself to look like people that he has had physical contact with. He has forgotten his own identity and sense of who he is. He is also unable to shape shift into his real form. 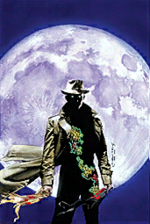 Protean as seen from the Comic Posters Veteran Rewards Base Items

More recently, Protean put Justin Sinclair (Manticore) in the hospital in an attempt to lure out the Back Alley Brawler. When Back Alley Brawler came looking for the villain responsible, Protean shot him the back nearly killing him. Back Alley Brawler was saved by the arrival of Sister Psyche, Numina and Manticore. Manticore apparently killed the shape shifter with an disruptor arrow designed to break down his DNA structure.

Protean appears to be behind the rash of doppelgangers that crop up with the new story arcs from Special Agent Jenni Adair and Leonard. There is a connection between Protean and Praetoria, but what it is is unknown. In the hero side story arc, he is recruited by the Letter Writer to fight against the Coming Storm.

Protean is a notorious shapeshifter, known for his murders of high profile heroes and their families. His earliest victims were the parents of Manticore. He also is responsible for the death of Dauntless, Galaxy Girl's sidekick. It was rumored that Manticore killed Protean in a fight some time ago but somehow Protean survived. He is now out to continue his reign of terror upon the people of Paragon and the Isles, while aiding the forces of Praetoria!

note: this is from the villain side arc. If his description is different in the hero side arc, please add it