This article is about the hero Dauntless. For the Dauntless exploration badge, see Dauntless Badge. 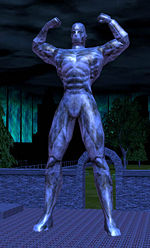 Statue of Dauntless in Skyway City

Dauntless, whose civilian name was Robbie Prescott, was Galaxy Girl's sidekick until he died in battle, defending his mentor with his last breath.

Robbie Prescott first met Kelly Graham while delivering sandwiches to the office where she worked. After accidentally discovering that she was Galaxy Girl, Robbie was inspired to become Dauntless. He helped Kelly in all aspects of her service to Paragon City, never expressing his love for her.

The archvillain Protean had learned the secret identity of Galaxy Girl and took her captive at the charity kitchen where she volunteered. Galaxy Girl lay helpless as Protean prepared to murder the trapped civilians. Protean was planning to destroy everyone that Galaxy Girl's life had touched. Dauntless learned of the crisis and rushed headlong into battle. Although he was completely outclassed, he fought until his last breath. His sacrifice gave Galaxy Girl the time to recover and defeat Protean, ensuring so many more survived.