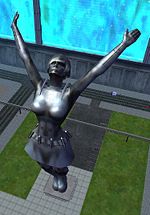 Galaxy Girl was born Kelly Graham, a bright and capable girl whose parents emigrated from Scotland when Kelly was three. Her parents moved into a small but cozy house in Paragon Heights, and Kelly grew up there through the 1930s and 40s.

One cold night in late December, 1951, nineteen-year-old Kelly was hurrying home from her secretarial job. The streets were nearly deserted, but Kelly had lived there all her life and knew them well. She never felt alone when she could see the familiar skyline, and the night's stars.

Kelly did grow concerned, however, when she saw another young woman about to cut through Constellation Row – although the neighborhood was fairly safe, there were areas one did not walk alone. Before she could caution the girl, several masked men jumped out of a black alley and dragged her in, despite her cries.

Kelly called out for help, but the streets were empty. No heroes, no police, not another living soul. The only sounds she heard were the girl's sobs and the punks cackling laughter.

Kelly's fear and frustration turned to anger. She hesitantly stepped to the mouth of the alley where she could see one thug riffling through the woman's purse, while the other pinned the poor girl to a wall. Kelly yelled at them to stop. The lead thug looked up at her, startled. He laughed at her intrusion... and shot her in the chest.

Kelly felt her life draining away, pouring out into the streets that she called home. It wasn't supposed to end like this, dying futilely and alone. When she heard the thug shoot the other girl, she decided that it wouldn't be her epitaph. Kelly opened her eyes and with a massive effort she stood up.

The thugs did not see her behind them, but Kelly saw more clearly than ever before. She saw the wisps of energy that surrounded them, and she reached out and drew upon them. The men gasped in shock, but Kelly and the girl felt life giving energy rush back into them. Staggering, the thugs blasted away at Kelly. She held her ground and somehow managed to draw the kinetic energy out of the bullets she then hurled it back as bolts of pure force, knocking the thugs sprawling!

Kelly rushed to the girl's side, and found she was floating on air - Kelly was flying! Kelly flew the girl home safely, and in so doing it dawned on her that she suddenly had a purpose. Someone needed to help the helpless of Paragon Heights, and she made up her mind it would be her. She would help her parents and her friends get through each day as best she should, and at night she would patrol the neighborhoods as... as... she was stumped at first. Then it occurred to her, if she could fly among the stars, she would represent space, and the future, and the hope of tomorrow... and she would do it in her own backyard, in a more personal way. She would be Galaxy Girl.

Throughout the 1950s Galaxy Girl was a welcome sight throughout Paragon Heights. She always had time to help a citizen in need, and she was a warm and gentle presence. She fought crime, flying through the night sky and blasting evil-doers with bolts of force, but even more she volunteered in charities, helped the jobless find work, and unified the neighborhood into looking after its own.

Towards the end of the 60s, with stories of heroes drafted into Cold War operations, Galaxy Girl began to question her costumed lifestyle. By this point, much of Galaxy Girl's time was spent helping her fellow neighbors, not fighting crime. She was torn between her two identities. As in many lives, it took a tragedy to give her a clear path.

Kelly volunteered at a soup kitchen, but her good deeds could not shield the less fortunate from the consequences of her heroic lifestyle. When one of her enemies, the shapeshifting crime boss Protean, learned of her secret identity, he planned to destroy everyone her life touched. His ambush at the charity kitchen took Kelly unprepared, and she lay helpless as he prepared to murder the trapped civilians. Galaxy Girl's sidekick, the young man called Dauntless, learned of the crisis and rushed headlong into battle. Although he was completely outclassed, he fought until his last breath. His sacrifice gave Kelly the time to recover and defeat him, ensuring so many more survived.

After Dauntless's memorial, Kelly decided to hang up her mask and retire from the super-powered scene. She felt she could do more good as a civilian than as a hero. But her secret was probably the worst kept in Paragon Heights - everyone knew Kelly Graham once flew as Galaxy Girl, and they loved her for it. They loved her more for the charity work she continued to do, and she was a valued member of the community.

Kelly grew older and wiser, and was seen almost as everyone's grandmother. She could speak frankly to kids who were getting into trouble, and she could talk compassionately at memorial services. She happily kept her little house in pristine order, and was often on the stoop watching over the youngsters, or at town hall meetings fighting for what was right. She occasionally acted as a mentor to younger heroes, such as Ms. Liberty, often because she had known their parents or mentors in her younger days.

On May 23, 2002, the Rikti invaded earth. Paragon Heights, along with the rest of the city, was transformed from a modern urban center to a hellish war zone within minutes. As Statesman and the Freedom Phalanx led the charge, throughout the city every hero who could stand rose up to try to hold the line. Despite her age and retired status, Kelly realized she had no choice, and she joined a group of heroes to do her part. Kelly found herself with the most diverse, and possibility most desperate, supergroup she had ever known. Yet although her powers were rusty, Galaxy Girl's pragmatism and quiet confidence helped bring them together.

As the heroes made small gains, the aliens suddenly redoubled their assault. Seeing their line about to break, Galaxy Girl and Miss Liberty knew they had to fall back and regroup. On Miss Liberty's command, the heroes pulled back, but before the last group could retreat a platoon of Rikti hover tanks cut them off. Galaxy Girl insisted Miss Liberty lead the heroes to safety while she returned to help the trapped.

Galaxy Girl rejoined the struggling heroes, including Ms. Liberty, and used her powers to heal them enough to escape. The action took the last of her strength. When the smoke cleared, Galaxy Girl was gone. Galaxy Girl died, but her wisdom and grace ensured that the heart of the neighborhood survived. It was through her actions that the next generation would survive to retake their city.