This Task Force can be completed solo, but due to the difficulty, a team is recommended.

Mender Lazarus is found near the pool in the courtyard of Ouroboros, opposite the entrance into the building.

Alright, Character, let me explain something before we get started.

Each of us Menders has his or her own theories on how to stop the coming storm. I call it the 'coming storm' because Silos was very clear to us before we came here that we could not reveal anything regarding the future inva-- I mean 'storm'. We need to control the variables. The more people know, the bigger the circle of those who could potentially cause alterations to the time stream. We wouldn't be able to track or control it. We'd see changes but not know where they came from and we can't have that.

Each Mender has a theory on how to stop the coming storm. So, you want to give me a hand with my pet project?

Note: This series of missions is recommended for group play. You're welcome to try it as a solo player, but it'll be tough. Consider yourself warned and good luck either way.

Fascists. It always comes down to fascists.

In your recent past the fascist 5th Column party was overthrown and the Council took their place. Now, the Council might not be the best group in the world, but compared to the 5th Column, they at least had some morals. You know nothing about what really happened during the 5th Column overthrow, namely the fact that you were directly responsible for it. Take a moment and let that sink in... okay? Ok.

The battle between the two sides was close and in many timelines the 5th Column survived and prospered creating a world that is a little bit '1984,' a little bit 'Soylent Green,' and a whole lot of 'not good.'

So, right off the top, I want you to go back in time and upload a computer virus onto the 5th Column network. This will give us the intel we need to find out what they're planning as well as disrupting their infrastructure enough to bring them down.

I admire the fact that you're ready to go on this mission. However, not all the members of your team are present. You can't go anywhere until they're here.

You need at least one hero and everyone needs to be at least level 30 in order to begin.

Once we get the computer virus installed, I'll be able to tap directly into their system. There's a couple things I want to check out, not to mention the whole 'bringing their infrastructure to a grinding halt' part.

The first step to bringing down the 5th Column is to attack their computer systems.

You've uploaded the computer virus to the 5th Column's network, literally crippling them in the process.

Soldier 1: I told the systems engineer to update the software, but he just growled at me.
Soldier 2: Yeah, I'd just leave him alone. He's a little strange.

Soldier 1: Have you heard anything regarding project Mekman?
Soldier 2: Shh. I hear something.

Upon arrival: "There's a problem with the system code? That's odd. I just checked it yesterday."
Combat start: "You! Breaching our computer system is a death sentence!"

Nice. I noticed that I had access before you even stepped back through the portal. I've been checking through some of their files. It looks like it's time for us to go on a recruiting drive.

Convince Nosferatu to join the Council

You need to convince Nosferatu to join the Center's army. He's working on some very edgy tech and I don't like extrapolating where it could end up. Bringing Nosferatu on as a member of the Council might be the only way to offline his 5th Column projects.

You're going to have to go in under the disguise of a Council member. We don't need to worry about a costume change or anything, we'll just have you upload some information to their systems that gives them the impression that the Council is planning an attack on that installation. Granted, that means they'll be expecting you, but I'm sure it's not anything you can't handle.

Find the nearest computer and upload the intel on it so they believe you're a member of the Council. The Council guys are already making a play for the 5th Column, so this won't be very hard for them to believe.

Nosferatu has always been the right hand of Requiem. It is time for an amputation.

Nosferatu has decided to join the Center. Well done.

Nicely done. Now the conflict between the Council and the 5th Column is in full swing. When Nosferatu arrives with his full contingent of Vampyri, the Center will not look a gift quadruped in the mouth.

One last thing before you go, Character. You and I have been through a lot. I just wanted to let you know that I appreciate your friendship. Here's to many more past adventures.

React to the 5th Column's movements

Let us not forget Newton and his lovely little laws. Simple though they might be, occasionally we can see them in action. With Nosferatu on the side of the Council, the 5th Column is responding by bringing out one of their most powerful members. Col. Burkholder is their 'equal and opposite reaction' to our earlier moves. I believe it's time for a countermove.

The funny thing about Col. Burkholder, and this is simply something I've seen through history investigating him, is that he's not the most loyal individual. If his handlers believe that he'll stand for them, they've got another thing coming. However, he's a smart man so he will put up a good fight either way. I want you to go in with Nosferatu. He's now a Council member and believes that you work for the Council as well so it shouldn't be a problem. Just give Col. Burkholder the same offer you gave Nosferatu and you should be good.

Burkholder shouldn't be a problem. Your real problem is going to be what the 5th Column are going to do when they realize you've got him on the Council's side.

With Nosferatu on the Council's side, Col. Burkholder will be aware of something going on. He will be on guard for you.

5th Column soldier: "You are a traitorous dog. I should put you down."
Nosferatu: "I will tell you nothing. Kill me first."
Archon Fleischer: "This kind of deceit disgusts me. I say we execute him now."

5th Column soldier: "Wipe them both from this earth!"
Nosferatu: "You should have killed me when you had the chance!"
Archon Fleischer: "You! You will pay for turning him!"

Upon rescue: "I told them nothing. I have not disappointed you."


If refound: "Another close one. Thank you."


Defeated: "This is temporary. I will escape and you will pay."

Before combat: "The Vampyri have gone over to the Council? Huh, I wonder how well the Center pays."
Combat start: I'm up for recruitment, Character."
At 75% Life: "Oh, I see. You have to make it look good."
At 50% Life:
"Alright. Alright."
"You don't have to make it look THIS good."
At 25% Life: "Tell the Center I'll join!"
Defeated: "Oh fine, be that way."
After defeating a player: "You know, if you're the best the Center has to offer, I will stick with Requiem."

Excellent. I hoped Nosferatu would help you out on that last mission. He presence in the encounter was key for later events. Now that Burkholder is on the side of the Center, there is only one final step before the Council will truly take control.

We are true allies, you and me. I will speak your name with reverence to all the times of the ages. I am in your debt.

The last piece of the puzzle needs to be put in place. The last three leaders of the 5th Column need to be removed from power. You'll have Nosferatu and your new friend Col. Burkholder on your side to help you out. I bet you can't wait.

Excellent. You simply need to take out Maestro, Requiem, and Vandal. Go to Striga and take them out. Once they are defeated, the rest of the Column will fall.

Now, I warn you to be cautious. Everything I've found regarding this final battle tells me that there's a good chance the 5th Column may exist afterwards. They go so deep into hiding though that I have no record of them anywhere after this point. So, you need to make sure all of those leaders are taken down. 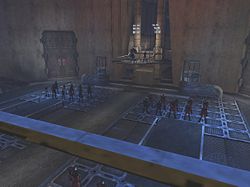 You need to find the leaders of the 5th Column and remove them from power. Only then will the Center be able to take control.

This is the final battle that will decide who will gain control of the 5th Column forces.

You've defeated the 5th Column. The Center is now able to gain control of and remake the Column in his image.

5th Column soldier: "Ah, the instigator of this little coup."
Nosferatu: "Character, let's show him what our bosses really think."
Ubermenschen Boss: "It's about time we put this overthrow into the ground."

5th Column soldier: "You always were full of lies."
Col. Burkholder: "I know what you're thiking... I'm not a traitor. Really?"
Ubermenschen Boss: "You were nothing but a waste of time, Burkholder."

5th Column soldier: "Ah look Burkholder, your friends are here."
Col. Burkholder: "Character! Uh, I was just telling them how loyal I am to the cause."
Ubermenschen Boss: "For the 5th!"

Before combat: "Why are we waiting for them? We should simply kill this Center."
Combat start: Need data
At 100% Life: HA! You can keep your Council!
At 75% Life: "You think a little scratch is going to stop us?"
At 50% Life: "Perhaps you should consider a career change."
At 25% Life: "Eh... What are you doing to me?"
Defeated: "Nooooooooo!"
After defeating a player: "I'll make sure to throw the Center in the same pit I put you!"

"The Column never shall."

You have taken out the 5th Column and paved the way for the Center to take control. He will rename the group, calling it the Council. His control will be harsh and nearly as deadly, but trust in time. It is for the best.

'You know nothing about what really happened with the 5th Column overthrow, namely the fact that you were directly responsible for it.'

Is this the world you're now in? One of paradox and a headache? Perhaps. But you know one thing, anytime someone offers to take down some fascists, you're the first to volunteer. You infiltrated the 5th Column bases, impersonated a Council member, even got Nosferatu and Col. Burkholder to join up on "your" side.

But none of it compared to the look the faces of the 5th Column leaders when you stormed their complex with their own men.

You'll remember that one for all time

Unlike the larger Task Forces, "Overthrow" is more like a short Story Arc, and can be soloed in an hour. Consequently, it has no accomplishment badge, and offers only a Single Origin Enhancement reward instead of a Pool C Recipe.