Requiem is an Archvillain from the Council. He was originally the leader of the 5th Column and seems to have resumed his post as of late.

Heroes can face him:

The being known as Requiem is the unholy union of a Nictus, a being of living darkness, and a human host.

Of the Nictus part, only the name is known: Dirge of Entropy, and is described as a strong being. But other than this, nothing is known about it.(1)

The human part has much more info available. The human host of Requiem was once called Ridolfo Uzzano. Ridolfo Uzzano had dreams of being a priest, and thanks to this he could investigate the Vatican records and learn about a sinister sect called the Path of the Dark.(2) But despite what he found in the Vatican, it seems that it was the villain Arakhn, who somehow already had the information back in those days, who showed him where to look to find the Path. (3) Apparently, Ridolfo already had plans for the future when he met her, including the assasination of The Center (1), but it seems Arakhn had even bigger plans, eventually forcing Requiem to change his own. 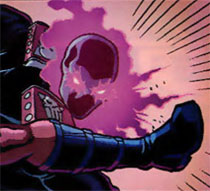 Requiem, as seen in the Blue King CoH comic book.

Armed with this knowledge, and now as a functionary in Mussolini's government, he prepared an expedition to explore a system of caverns near Ravenna with the intention of contacting the Path. His success came on April 22, 1926, when his expedition went underground with the purpose of finding the sect. What he didn't know was that a group of adventurers had learned of the evil sect and Uzzano's goals and had followed him to ruin his mad schemes. There was a terrible gunfight in the caverns between the adventurers on one side and the sect and the expedition on another. It was during that fight when Uzzano seen for the last time, screaming as the darkness writhed around him, moving him like an ocean wave dragging a man out to the sea. That was the last day Ridolfo Uzzano was seen alive.(1)

Apparently, Requiem was first seen at some point in early May, 1926. (1) The creature presented himself before Il Duce and offered his services (3). Apparently, Mussolini accepted, as it seems he had some sort of charge in the Italian government in those days.(1) Requiem would not waste time, and the first thing he did was to have revenge on the adventurers who had troubled him so much. He pursued them relentlessly all over Italy, and finally battled them in late June of the same year, killing one of them and forcing the rest to flee the country.(1)

Though it seems clear that Requiem and Arakhn's ultimate plan was to turn Earth into a new homeworld for the Nictus race (7), very little is known about what he did in the following years, other than the fact that he recruited Othman Doul, the man who would become the villain Vandal, for his cause. (4) At some point, the villain Nosferatu joined the organization as well. Probably the Fifth Column was formed in these years. Though other powerful villains such as Colonel Burkholder and Maestro would eventually join as well, it seems that Requiem, Vandal and Nosferatu are old-time comrades and friends (as much as a Nictus can befriend anyone), which doesen't mean Requiem wouldn't kill them if it would fit his plans. (7)

After decades of plots and battles, the Fifth Column fell (or was reabsorbed, depending on who you ask) at the hands of the Center and his Council, partially thanks to exterior help, (6) and then Requiem was left in his current situation: as a mere lieutenant within the Council, no longer able to do as he pleased. Some believe he's still plotting his revenge against the Center. (5) 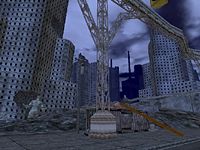 Still, it seems Requiem had foretold this outcome and planned ahead about it. No one can say for sure how many of his plots are still to be uncovered... or need to be stopped.

As a final note, Portal Corporation has found a world which deserves to be mentioned. Lambda Rho 57-20 is also called Werewolf World. This is a world in perpetual night, ruled by the Requiem of that dimension. This is an alternate world where the plot of A Path into Darkness succeeded and the planet seems to have suffered a major invasion of Nictus, to the point of having no more daylight, only darkness. Requiem and that dimension's War Wolves remain as the only witnesses of what was once an alternate Earth. Perhaps this place is the best warning of the dangers that Requiem, his allies, and his plans pose even for the planet as a whole.

Ridolfo Uzzano has come a long way from his humble beginning as one of Mussolini's lapdogs. The primary cause of his success was his fusion with a Nictus, a being of utter darkness. The Nictus gave Ridolfo the ability to scorch his foes with an infernal fire. Though he is now over 100 years old, Requiem remains a fearsome foe in battle.

Ridolfo Uzzano has come a long way from his humble beginning as one of Mussolini's lapdogs. The primary cause of his success was his fusion with a Nictus, a being of utter darkness. The Nictus gave Ridolfo the ability to scorch his foes with an infernal fire. Though he is now over 100 years old, Requiem remains a fearsome foe in battle. Before The Center arrived to spoil his fun, Requiem ruled over the massive military organization that was subsumed by the Council. His closest attendants suspect that Requiem is still smarting from his loss of power, and plotting his revenge.

During the mission Defeat Requiem:

Before combat: Hero comes for me. In a way, I am glad.

During the mission Remove the 5th Column leaders he will address his soldiers:

And then during combat: