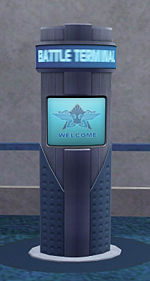 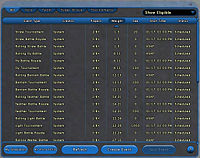 You can sort through the matches by using the tabs at the top of the Match Selection screen. These tabs are as follows:

The Drop Down dialog in the upper right is a filter, allowing you to only show events that fit a specific criteria.

To select your match, use the scroll bar on the right hand side of the window to find an acceptable match, then highlight the match you want to join by left clicking on it, then click the Join Match button.

Scheduled events are the only way for players to participate in Tournaments, and they have entry fees based on the weight class: 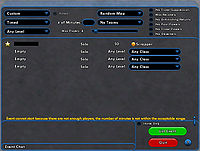 You can create your own match by selecting Create Event on the first screen of the Battle Terminal. Here you can set up the rules of the Event, and launch the event when all the players are ready.

You can choose how many Players the match will be for, as well has how many different Teams there will be. You can set up a specific Time Limit, or set up a number of defeats required to end the Match.

If you click the Rated button, then you will severly limit the options you can change, as the event will now count towards your overall Arena Rating. Certain restrictions will apply and the match cannot start until all requirements are met. 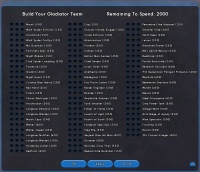 A Gladiator Match is a special kind of arena battle where each player commands a host of creatures, called "gladiators". These creatures are unlocked by collecting Gladiator Badges, displayed on the Gladiator tab of the Badge menu. You may choose your team of gladiators by selecting the "My Gladiators" button in the Arena Kiosk menu. All gladiators you have unlocked are listed along with their point costs. To build your team, select any gladiator from your list using the radio buttons next to it. The cost of that creature is automatically subtracted from your total points. You can have up to three creatures of the same type and cannot exceed the 2000 point limit. When you are done, select "OK" or "Apply". The game will remember your selections, and these gladiators will be your team for any Gladiator Match. You can return to the Gladiator screen and change your team selections at any time outside an arena battle.

Once the match starts, your gladiators do all the fighting for you. You are untargetable and unable to use any of your own powers, however you move around the map with limited flight powers. You can command your team using the same controls the Mastermind uses to command his minions. 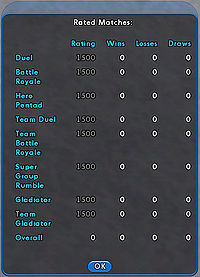 When you click the My Arena Rating button, you will be taken to a screen that shows your rating based on the number of wins, losses, and draws in each event type. These totals are cumulative over the life of the character.

The following chart shows the details that the arena match creator can specify by event type:

Victory Types are the conditions that need to be met in order for the match to end and a winner to be declared. Rated events may only be Timed. Below is a list and description of each Victory Type.

Victory Values vary based on the Victory Type chosen.

You can choose to restrict the weight class of the event. Characters higher than the weight will be exemplared down. Characters lower level will no longer be able to join the event, but if they are already participants they may still fight. If no level restriction is chosen, characters of any level may fight in the event.

Players can select from one of the following instanced maps for their arena match, or they can let the system choose a random map. Each map is designed for a recommended number of participants as noted.

In multi-team matches, your Sides are determined by what color team you are on. If you want to be on the same Side as someone else, change your color to match theirs. Depending on the type of event, up to eight teams may be used. The colors of teams are Red, Blue, Green, Black, White, Yellow, Orange, and Purple. The total number of players in an event varies by the type of event and whether teams are allowed.

Ground Rules are the rules of engagement and place limitations or alter game mechanics. Rated and Gladiator events have all options disabled except "No Observers" and "Invite Only." Below is a list of Ground Rules and how they function.

Upon entering an arena map, a "Waiting for Players" period will begin. The system will wait until all players are on the map or until one minute has passed, whichever happens first. After this, there is a 30 second "Buff Players" phase which allows players to turn on their toggles and buff themselves and their teammates. During this phase, all players are phased and immobilized, and can only affect and be affected by their allies.

Arena matches have a 15 second global respawn timer. When that timer is up, all defeated players respawn at the same time. After respawning, players will be phased out and can only affect and be affected by friendly players, just like during the Buff Players period. In addition to this, all teams have a static spawn location. This means that, each time a team member is defeated, they will respawn at the same location.

The Lanista badges are earned by winning rated Gladiator matches and the Cage Fighter badge is found on the Cage Match map.

The following Accomplishment badges were only briefly active in-game after the Arena system went live and have remained unused since.