Prior to Issue 21, Outbreak was the Hero tutorial zone. It was replaced by a new co-op tutorial experience, although the zone itself was not removed from the game. Consequently, any characters that were in Outbreak upon the release of Issue 21 were able to complete the old tutorial and exit to Atlas Park.

Outbreak is a small section of Paragon City that has been locked down and quarantined. A mysterious drug has made its way into the bloodstreams of the neighborhood crooks and addicts, and as a result these contaminated criminals have begun a destructive riot. New heroes are urged to come to the Outbreak zone to help the Paragon Police Department deal with the Contaminated and help the Rivera Medical Center find a cure for the terrible mutagen. 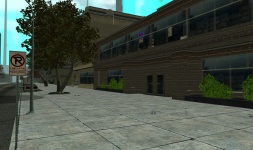 The area known to many as "Outbreak" is a quarantined and sealed-off portion of Paragon City unfit for citizens to live and work in. The area itself is something of a crossroads - a commercial area to the north meets an area of low-income housing to the south. To the east of the apartment buildings, a cluster of high-rise office buildings reach for the sky. This arrangement of districts made the neighborhood a breeding ground for petty crime. These criminals, by and large drug addicts, are now the carriers of a dangerous virus that drives anyone contaminated with it to extreme violence and rebellion.

The criminals of the neighborhood broke into an office building in the high-rise section of the neighborhood and stole a stash of strange drugs that they suspected would give them the ultimate high. They indeed rode on a wave of euphoria for days, and crime temporarily plummeted as they spent days strewn about their crime dens like so many soiled pillows. However, soon enough they began to change. The drugs they had taken from the Crey Industries office were no ordinary drugs. These drugs, rumored to be Rikti mutagens, doubled the strength of the criminals and gave them a sense of invincibility. They began rioting, tearing down their own homes and businesses, all the while ingesting more and more of the drug. By the time the Paragon Police Department became aware of the volatile situation, their eyes were already glowing green and half the neighborhood had been reduced to rubble. S.W.A.T. was dispatched and the neighborhood hospital, Rivera Medical Center, began treating the few criminals that had only ingested a small dose of the mutagen. The rest, however, were lost. They would have to be eliminated.

Though the criminals were only armed with rusty handguns and lead pipes, the police were unprepared to deal with their sheer numbers. There was also apprehension as to whether the "hot zone", or the area in which the contamination was present, was safe for ordinary humans. Several broken Rikti Drones were found littered on the streets outside of the hotzone. Crey technicians arrived on the scene and helped the police investigate the matter. In the end, it was decided that though the contaminated criminals were relatively weak, there were simply too many for the police to handle. Fences were hastily erected to form some sort of barrier between the Hot Zone and the rest of the quarantined neighborhood, and a few Police Drones were deployed to watch over the only two entrances into the zone. 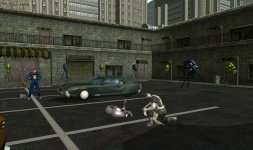 Today, the "Outbreak" zone serves as a proving ground for heroes just arriving in Paragon City. Though the neighborhood's business and high-rise areas remain devoid of Contaminated (though eerily empty nonetheless), the former housing area is little more than a glorified junkyard. Now known as the "Hot Zone", police drones help confine the Contaminated to their old haunt while new heroes venture beyond the chain-link fences to bring the fight to the crazed fiends that riot within. The PPD instructs new heroes on the art of combat while veteran hero Coyote handpicks the best of the new recruits for his investigation. Coyote aims to identify which high-rise houses the office building that was broken into by the thugs. The offices are likely to have documentation about the mutagen on their computer system, but it is also likely that there are Contaminated criminals inside. His comrade, Flower Knight, was sent to ascertain this but has not been heard from for some hours...

Officer Flint has simple duties in the Paragon City Police Department, but when a crisis arises he's always first to volunteer for extra duty. His friendly nature and good heart make him an ideal contact for new heroes learning their way around paragon city.

Officer Parks has walked the streets of Paragon City since he was a young man. He takes great pride and pleasure in doing his part to keep the city of heroes safe.

Sergeant Hicks is a former Hero who lost his powers shortly before the Rikti war. He felt useless on the sidelines during the war, so he joined the police force. He was recently promoted because of exemplary field work. Although new to his position, he has earned the confidence of all his fellow officers.

Matthew Bragg never sought the mantle of Hero, but when Old Man Coyote needed an avatar on earth, Matthew was selected. An excellent crime-fighter with a magical sense of humor, Coyote is renowned for his tutelage and mentoring. He is always around to show new Heroes in Paragon City the ropes. 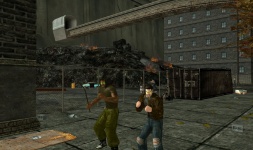 There is one badge available in Outbreak - Isolator. To earn this badge, you must take down 100 Contaminated. Doing this solo at level one can be tedious, so either do the door mission to rise to level 2 before attempting this, or find some other new heroes and team up to take down the sickly scum - or indeed both for best effect. If you speak to Coyote after completing the door mission, or skip the tutorial altogether, you will not be able to get this badge easily in the future. With the release of Issue 11, you have two post-tutorial chances to get the Isolator badge. The first is the second mission of the Ouroboros Initiation story arc from The Pilgrim, which spawns sufficient Contaminated to earn the badge. The second is to repeatedly kill the single Contaminated foe that appears near the train station in Recluse's Victory. This can take an extremely long time. Strongly consider going for the badge with every character you make.

If you accidentally talk to Coyote before gaining the badge but don't want to leave Outbreak, then do not cancel his dialog. Immediately quit the game while the dialog is still open. When you log back in, you'll still be in Outbreak. If you cancel his dialog, you'll be transferred to either Atlas Park or Galaxy City at random.

After rescuing Flower Knight, downloading the Rikti drug from the computer, and defeating all the Contaminated in the abandoned office, return to Coyote and you will be able to choose your starting point in Paragon City proper - Atlas Park or Galaxy City.