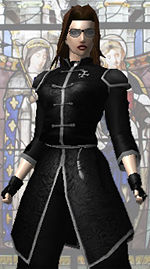 The time-bending, trouble-making, techie pagan nun.
Co-founder of the Triumph SuperGroup "Twilight Vanguard."
Destined to become Mender Anomaly of the Menders of Ouroboros.
Leader of the Sinclair Syndicate, a motley group of players both on Hero and Villainside, across a number of servers.
But most generally known as "that chick who makes videos."

Johanna Sinclair has begun making a name for herself for her constant running all over Paragon City to document the deeds of the various heroes who fight the good fight every day. However, she's not above having fun on the job, and as far as she's concerned, if she doesn't die at least twice while filming, the shot wasn't worth it. Johanna and her videos have begun to gain quite a bit of acclaim among the heroes of Paragon City, and she seems determined to give Amanda Vines in the Rogue Isles a run for her money.

(To clarify a common misperception, she is NOT related to the billionaire playboy Justin Sinclair (aka Manticore), although she certainly wouldn't be averse to him throwing some funding her way. She and Manticore do know each other, although their relationship got off to a rather rocky start. She'd been invited to his wedding to Sister Psyche to film it, but in the chaos that spawned afterward, he accidentally shot her before he realized who she was. He did apologize to her after things calmed down, however, although Johanna suspects that his new bride had something to do with the apology.)

Recognizing the need to reach heroes across the numerous shards, Johanna now has an incarnation on all the North American Servers, as well as the Training Room Test server.

Rumour also has it that her Mender incarnation, Mender Anomaly, is also in Paragon City at the moment. It's speculated by those knowledgeable of the Chronoverse that the two of them meeting would be an astronomically bad idea.

The Woman Behind the Camera

Johanna Sinclair is the primary alter ego of Michelle Travis, founder of Samuraiko Productions. One of the fan videographers for City of Heroes and City of Villains, Michelle has produced teaser and trailer videos for Issue 10, Issue 11, Issue 12, Issue 13, a teaser for the Valentine's Day Event 2008, a commemorative video, two commercials and two music videos (with several other CoX video projects in the works). In addition to her film-making, she is also an advocate of other CoX machinima creators, and an active participant in the Multimedia forums for City of Heroes and City of Villains.

After the amusing incident at the Manticore/Sister Psyche wedding (which Michelle had attended with one of her Villain characters, leading to her getting shot in the back by Castle, shot in the back by Citadel, and then shot in the face by Manticore), Ex Libris gave Michelle's Triumph incarnation of Johanna Sinclair the gold title of "Videographer - just here for footage!" This has become something of a running joke in-game where heroes will see the title, stop, wave at Johanna, say "Hi Mom!", and fly off. Michelle also cheerfully uses this title as proof of her non-combatant status in the PvP Zones when she has to go into those zones to film. To her considerable surprise, several PvPers in those zones have volunteered to act as 'security' so that she can film without getting shot at by other players.

Michelle prefers to do the bulk of her filming on Triumph because of having a level 50 character there who can access every Heroside zone in the game. Her other servers of choice for filming are Justice and Liberty, where she has multiple characters in various supergroups. However, she is not averse to showing up on other servers if a group is willing to Sidekick her. When auditioning for her Issue 12 teaser, due to the Test server being unavailable during closed beta, she held casting calls on all eleven servers over the course of two nights, and then later participated in the open beta casting call on the Test server to cast her Issue 12 trailer.

As part of her filming efforts, Michelle recruited a core group of players on Triumph willing to help her record scenes. These players travel with her from zone to zone, participating in missions, posing for shots, thus allowing her to set up more complex scenes. As most of these players already belong to various supergroups, she christened them the 'Sinclair Syndicate.' The Syndicate currently numbers roughly twenty players, and tend to be the first people Michelle seeks when filming. When she needs the Syndicate, Michelle will first log in as Johanna and send a message to any of the Syndicate members who are online, to see if they're available for a filming session. Any player is welcome to 'join' - Michelle's strictures for membership include the ability to 'kick a**, look good, and follow directions.' About three-quarters of the time, the Syndicate members themselves do not appear in the finished video - instead, Michelle maps in other characters who are more appropriate to what she's filming. However, the Syndicate members are generally satisfied with the knowledge that they've helped with the creation of a video, and are willing to forego ego.