This article is about the hero Castle. For the game developer, see Castle (Developer).

Castle is a hero trainer on Peregrine Island in Portal Court neighborhood. His coordinates are (-1505, 0.5, -3429.5), and his location is marked on the map as a trainer. He is in the Portal Corporation area in front of their sign.

Born with the ability to create and manipulate Flame, Christopher Thales never had much interest in being a Super Hero. Instead, he focused on his career in politics and public service. That changed when the Rikti invaded though, and since that day, he has been a stalwart defender of Paragon City as Castle!

The Castle character is based on the developer Castle's Champions character named "Rook". During the beta of City of Heroes, the character name Rook was already taken, so Castle was born. [1] 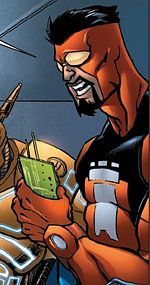 Castle as drawn by Jon Landry