The Players' Guide to the Cities/Zones

From Paragon Wiki Archive
< The Players' Guide to the Cities
Jump to: navigation, search 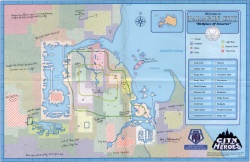 The zones within Paragon City are separated by War Walls. Most zones can be reached on foot, but there are more efficient (and typically safer) methods for traveling from zone to zone.

The monorail is the best way to move between zones in Paragon City. If it doesn’t go to the exact zone you want to be in, it definitely goes somewhere close.

There is one monorail line operating in Paragon City. The line passes through each of the following zones:

The ferry system is used to get citizens of Paragon City out to the islands that lie just off the coast. The ferry system can be used to access Peregrine Island, which is home to Portal Corporation. To board the ferry, simply hop on and enter the ferry.

In addition, there is a hero-smuggling operation that will take characters to Striga Isle, an island haven for criminals that is dominated by the Council. To board, click on the door that leads inside the cargo ship.

Helicopters provide transportation to heroes between the following zones:

Some zones are only reachable through the use of portal technology. The following zones are connected by portals:

Ouroboros is also reachable by portal, but the portal may only be summoned by a hero who has been entrusted with the secret.

Vigilantes and Rogues may travel between Independence Port and Sharkhead Isle via submarine. 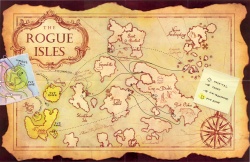 Map of The Rogue Isles

The area collective known as the "Rogue Isles" is spread out across many, many islands. Within the Rogue Isles are individual islands such as Mercy Island, Port Oakes, etc. This is where villains spend the majority of their time honing their skills.

The ferry is the primary means of venturing to the various islands scattered throughout the Rogue Isles. Simply approach a ferry and run aboard; there you'll be presented with a menu providing options of where you can journey to next. Early in the game, however, the ferry only connects you to one point from Mercy Island: Port Oakes.

Overall, there are two types of ferries: the Local Ferries and the Rogue Isle Ferries. Locals are zone-to-zone stops only: Mercy to Port Oakes only or Port Oakes to Cap au Diable only, etc. Rogue Isle Ferries are ferry lines that has a few stop options, such as Cap au Diable, Nerva Archipelago, Sharkhead Isle, and so on. Think of it as the regular line and express line.

The Rogue Isle Ferry system connects the following islands to one another:

In addition to ferries, you’ll eventually gain access to helicopters and flyers so that you may more easily fly the unfriendly skies.

The black helicopters provide connections between the following islands:

Some areas connected to the Rogue Isles are reachable only through portal technology. Portals are used to connect the following areas:

Ouroboros is also reachable by portal, but the portal may only be summoned by a villain who has been entrusted with the secret.

Some zones are accessible by both villains and heroes. These zones may be classified as player vs. player zones, or cooperative zones.

In cooperative zones, players may team with both heroes and villains to battle their mutual foes. A player cannot be invited into a mixed team or into a team made up entirely of the opposite faction unless both the player and the entire team are in co-op zones. Any player belonging to a mixed team is automatically removed from the team if he enters a non-co-op zone. Mixed teams do not need to remain entirely within one single zone -- they can be built across, or spread into, multiple zones as long as all zones involved are co-op ones.

Zones that fall into the cooperative category are:

For a comprehensive list of all zones in City of Heroes and City of Villains, see the Zone Overview article.