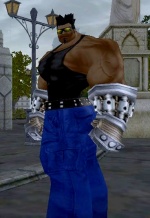 The Regulators is a signature hero group led by Back Alley Brawler, dedicated to fighting the War on Drugs.

"That no power shall triumph over the human mind"

The site of the Regulators' founding in Steel Canyon

The Regulators were originally formed in August of 1972 by the Back Alley Brawler as a supergroup dedicated in stemming the growing drug problem in Paragon City. The Brawler's friend Blue Steel coined their motto, "That no power shall triumph over the human mind."[1]

A former police officer, Michael White, the Back Alley Brawler, worked closely with Paragon City law enforcement to make sure that every criminal he and the Regulators brought to justice would see conviction in a court of law. Of course it didn't always work out that way, but more often than not, Regulator suspects taken in by the Regulators (and there were a lot of them) did their time in prison.[2]

In the Regulators' first major bust, they were able to apprehend a number of people tied to Paragon's drug trade, including Harry Frost of The Family, who swore, "They may have got the best of me. But mark my words, my Family will rule this town."[3] It would not be the last time that Frost would be apprehended by the Regulators.

Unfortunately, in spite of the big bust, it didn't seem to be making much of a difference. Certainly crime rates went down, but the drugs continued to make their way onto the streets and into the hands of anyone who wanted them.

The War on Drugs Abroad

Unable to make a dent in crime by arresting petty thugs, they teamed up with the Dawn Patrol, resolved to go after the drug problem at its root: the drug farms that produced the evil substances.[4] They launched a series of controversial attacks in South America and Central Asia, burning coca and poppy fields to the ground. These assaults, while popular in the US, were not very well received abroad, with over a dozen nations forbidding members of both hero organizations from ever setting foot or flying over their sovereign territory again.[5]

Unfortunately, there was little lasting effect from these bold assaults. The dramatic, albeit temporary, decline in imported narcotics merely left a void that a cartel of chemical engineers rushed to fill. With cocaine and heroin in short supply, the streets soon found themselves awash in a new, laboratory made drug: Superadine.[6]

The first sighting of Superadine was when the Back Alley Brawler arrested thugs who were selling drug vials full of green liquid. After having Dr. Brian Webb research the substance, they confirmed it was a powerful new drug, unlike anything encountered before.[7]

Soon after, none other than Harry Frost was arrested in a similar incident. Once again, the Regulators caught him red-handed, this time with a strange green substance. They arrested Harry, and this time the charges stuck[8] - but he would not be in jail for long.

The Family front company in Overbrook where Harry Frost died

In revenge for the arrest of their leader, the Family retaliated. During a patrol, the Regulators were ambushed by Family members. Although the group survived the vicious attack, Mina Horne, known to her comrades as the Illustrated Woman, died during the attack.[9]

Now the War on Drugs had become personal.

The Regulators Strike Back

With the death of the Illustrated Woman, key witnesses in Frost's case disappeared, or refused to talk for fear of their lives. Harry Frost walked.

But the Regulators were persistent. They redoubled their efforts to find the source of Superadine. The trail had gone cold due to the lack of informants, so the Regulators turned to arcane means of investigation. They teamed up with the mentalist Crimson Fist and other members of the Midnight Squad to find the source of Superadine.[10] Ultimately, they were able to trace the source of the drug back to a Family front company in Overbrook. During the ensuing raid, Family leader Harry Frost was accidentally killed when he fell off of the building's roof while attempting to flee the scene.[11] His son, Sebastian Frost, who was not at the scene, eventually took over the Family and his father's "business".

Soon thereafter, another raid was conducted in a joint effort by the Regulators, Midnight Squad and Freedom Phalanx on a suspected "Supes" lab in Baumtown. There, they discovered something so profound that Statesman and the Back Alley Brawler swore their comrades to secrecy.[12]

However, under Sebastian's control, the Superadine trade flourished. Frost was able to get all the Sicilian families under his banner, using the Superadine trade as an incentive for making a profit. To this day, Superadine still remains a problem in Paragon City, especially in urban communities such as King's Row and Skyway City.

Like many supergroups that fought during the First Rikti War, the Regulators suffered heavy losses battling the Rikti. After the Rikti Invasion, the Regulators were reduced to only a couple of members. Back Alley Brawler has dedicated himself, along with the other Surviving Eight to train and help new heroes that have come to defend Paragon City after the devastation of the war.

Shortly after the Rikti War, the Brawler semi-retired and became a trainer. Blue Steel began working directly with the PPD. The remaining Regulators were presumed to be either "killed in action" or disbanded.

Following the Shivan attack on Galaxy City, Eagle Eye has begun recruiting heroes for the New Regulators, to combat a growing epidemic of street drugs. Based in Kings Row, he invites Character to be the leading active hero of the group.