This is a summary of the first Rikti War. For a more thorough account, see Rikti Invasion (Narrative). 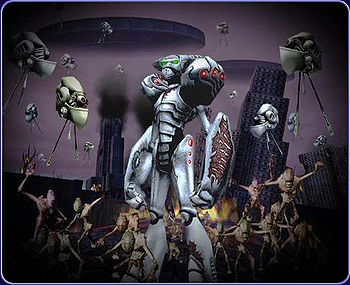 The Rikti War was an attempted invasion of Earth by the Rikti. The invasion resulted in the deaths of numerous heroes and destruction of large parts of Paragon City.

The invasion began on May 23rd, 2002 when many red lights appeared above and in Paragon City. The lights were flat circles which seemed to consume everything they touched. The heroes of Paragon City began to investigate, with major supergroups like the Freedom Phalanx, the Dawn Patrol, and Hero Corps sending teams into the city. As the day continued the lights appeared near other cities around the world. The Freedom Phalanx, with help from a former Portal Corp researcher, determined the lights were dimensional portals. Alien invaders began pouring out of the portals as night fell on Paragon City.

Thousands upon thousands of invaders came through the portals. Most were infantry wearing powered armor and attack drones. The largest portals produced huge assault craft, bristling with energy cannons and missile launchers. Even in Paragon City, the invading force proved overwhelming. The first attack wave was precisely planned and targeted the city infrastructure (power plants, communications, water), jamming the airwaves, and attacking military and police facilities. Somehow they had not predicted the ability of the superheroes of Earth who fought, some with everything they had, to repel the invasion. Statesman led the charge, flying through attack craft to cause them to crash, but changed to avoid collateral damage of the crashing ships. The Midnight Squad cast a spell to turn some of the Rikti assault tanks inside out, but the magicians were killed by a Rikti plasma blast. The fighting continued through the night, as the invaders outnumbered the heroes by at least 100 to 1. By the dawn of the 24th, Paragon City was divided into human and alien controlled neighborhoods and both sides began to erect defenses, many of which became the War Walls currently protecting Paragon City.

No invaders ever went back through the portals and no more ever came through. Twenty-four hours after the invasion began all of the portals closed in an instant. Governments around the globe tried to respond as best as they could. The United Nations Security Council formed Vanguard to help coordinate hero responses worldwide. These efforts were able to stop the alien advances, just as had happened in Paragon City, but were unable to reclaim any territory.

For six months, battles continued around the globe. The Rikti had been preparing for the war in secret long before the invasion and had established hidden bases and weapons caches beneath the ground. The Rikti used teleportation portals to strike at unexpected times and locations, keeping the Earth's defenders on the defensive. The Rikti also learned the impact the heroes were having on the war and on one day launched simultaneous attacks on numerous supergroup headquarters, destroying the belonging to the Freedom Phalanx, the Midnight Squad, and the Dawn Patrol. The toll of these battles were heavy for both sides as the Rikti lost over 10,000 soldiers while basically decimating Paragon City's major supergroups.

Earth scientists finally determined how to trace the signatures of the Rikti portals and it was revealed the aliens were continually receiving reinforcements from their home dimension. The inter-dimensional portals required tremendous power to operate and the only possible energy source must be on the Rikti home world. If a team of heroes could travel through the main conduit and destroy the energy source, the Rikti on Earth would be totally cut off from future reinforcements. By November 2002, matters were becoming dire and so Vanguard, led by Hero 1 decided to try and cut-off the Rikti from resupply. Assembling heroes from around the world, they split into two teams: Alpha Team led by Statesman, and Omega Team led by Hero 1. Alpha Team launched a full frontal assault on the Rikti to draw out the main Rikti forces, but at a large cost as the team had 80% of its members killed. Omega Team, which consisted of 50 primarily magic and artifact based heroes as the Rikti were particularly ineffective against magic, used the assault as a diversion and an ancient Charm of Invisibility to sneak into the Rikti main portal base. They fought their way through to the gateway, and Omega Team slipped through the portal. The Rikti had to reverse the flow of reinforcements from Earth back to their home world. After a short time a huge explosion rippled through the portal, with only the hero Ajax who had been held in a Rikti stasis beam as a survivor.

The Rikti throughout the world instantly knew of the portals closure and began to withdraw. With no hope of reinforcements the Rikti withdrew into their hidden bases. The war was over, but both sides had been nearly destroyed in the fighting. The Vanguard and the other great supergroups barely existed. With the exception of Statesman and a few others, all the world's greatest heroes had died in the war.

After a number of years passed, on 24 July, 2007, the skies over Paragon City filled with dark grey thunderheads. With the same happening in the Rogue Isles, Europe, and across the globe, small ships could be seen darting through the heavy weather... and there were so very many of them.

With activity mounting up in the Rikti Crash Site, the Vanguard re-established itself with a base in the now-renamed Rikti War Zone, with their own secured portals connecting to several smaller bases in both Paragon City and the Rogue Isles. Backed by the United Nations Security Council with literally unlimited warfunds to aid their fight, Vanguard started to recruit both heroes and villains to fight together with a common cause - against the Rikti.

You can find more information at the Official site