Designed by Dr. Aeon, the Power Transference System, or P.T.S., is a connection of pipes in Cap au Diable which pumps the geothermal energy from Mount Diable and turns it into useful energy for the citizens of that zone.

The incredible PTS's energy output is a testament to the genius of Dr. Aeon. These orange pipes depart from the geothermal plant in the side of Mount Diable and run through the streets and alleys of all the neighborhoods of the island, bringing electricity to every home in Cap. The power output of the PTS plant is off the charts, so high that not only it can provide the whole island with cheap, efficient electrical energy, but also the energy surplus has attracted to Cap au Diable to powerful megacorps such as Crey or DevCon, who may make all sorts of experiments which would be impossible to do in any other place due to lack of energy. And there's still more: after providing electricity for all those firms present in Aeon City, theres still enough surplus to export it for a profit. Logically, Lord Recluse is very happy with the whole situation. (2)

The PTS was, apparently, the first work Dr. Aeon ever did for Lord Recluse and Arachnos. Recluse was so impressed by the results that he appointed Doctor Aeon as new governor of Cap au Diable to replace the recently deceased Randall Kirchoff.(2)

The most vocal opponents to this device are the Luddites, who claim those pipes are diabolical. Despite those crazy allegations, sometimes the electricity of the PTS seems to grow alive, to the point of forming what appears to be living beings, usually of humanoid sizes, but sometimes of huge proportions, who attack anyone unfortunate enough to walk near the pipes when this happens. So far, Dr. Aeon has denied any relation of the PTS with such strange events.

It is really no surprise that the Clockwork are attracted to the huge metal structures of the PTS. It's stranger, though, that the Circle of Thorns also seems to be interested in the pipes.

For some reason, those who know the Clockwork well are puzzled by this situation, too. 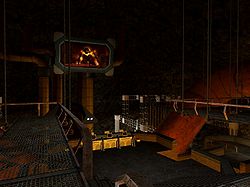 Most of the Luddites will probably never know how close to the truth they are. The PTS is no geothermal plant at all, but a way to exploit the eldritch energies of a demon of a huge size who has been imprisoned under Mount Au Diable for centuries. It's the energies of this fearsome fiend what powers the brilliant lights of the modern city over him, the same energies that animate the Clockwork near the pipes, the same energies that attract the Circle of Thorns to the pipes, and the same that causes the apparition of the "living electricity" near the pipes, despite all the distance. This demon may be seen in the monitor of the PTS control room (1), whose employees seem to be aware of the true nature of the plant.

Likewise, the sigils that cover certain parts of the PTS can be there to prevent any major leaks of eldritch power. Besides, the PTS' pipes are mentioned as being done in cold iron (1), probably for this same purpose.

Oddly enough, it seems the people of Cap au Diable regard working in the PTS as a good job, despite the Clockwork attacks and the manifestations of living electricity, having a union and all. The Arachnos personnel working in certain areas of the PTS, such as the control room, seem to be fanatically loyal to Dr. Aeon, even over the official Arachnos command representatives, such as Marshal Brass.(1)

Some years back (!), Dr. Aeon was drilling Mt. Diable and his idea was building a true geothermal plant to provide electricity to the isle. Sorely pressed by Lord Recluse, who wanted results, and under the watch of Marshal Brass, who wouldn't mind to see him beheaded (politically or otherwise) he was forced to drill deeper and deeper, searching for more heat. He soon noticed the excess of heat in the volcano and eventually found the fiend, while looking for the source of that heat and more power. Never a man afraid of risks, or even sane enough to be, rather than keeping the citizens out of the reach of the demon, and bury it with cement and stone, Dr. Aeon decided that he could exploit the beast for his own benefit, as a captive energy source.

He has been doing just that during the last years.

His maneuvers have served him well so far: all of a sudden, the energy trouble of the island was solved, Lord Recluse was pleased and Aeon was appointed as the new Governor... now having Marshal Brass under his direct command.

What may (will?) happen if (when?) the demon breaks free is something no one wants to imagine. 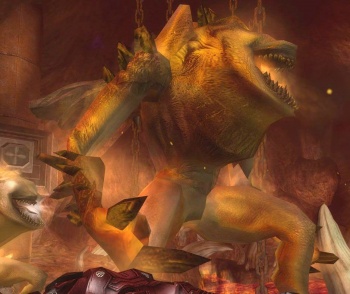 Marshal Brass' Story Arc "The Aeon Conspiracy" explains in-deep the true nature of the PTS and give some important details about its reckless creator.

!: This is an inconsistence in the storyline: The CoV official site (Cap au Diable) mentions that Dr. Aeon started working in the PTS soon before he became Governor of Cap au Diable. That was back in 1990. Instead, the mission of Marshal Brass Find out what's wrong with the Power Transfer System for Marshal Brass, describes how the Clockwork bought for melting were coming back to life when near the PTS, mentioning even the Clockwork King. The Clockwork King appeared only in the days of the Rikti War, which took place in 2002. So both dates can't be right.

Please note that the conclusions reached in this article are based on the facts and clues discovered in-game. If those facts turn out to be false in a later date (as it was Statesman's origins history, for example), all of this is worth nothing.