This article is about the NPC, Dr. Aeon. For the developer, see Dr. Aeon (Developer).

To know the true origin of Dr. Aeon please read the article on Dr. Egon

Dr. Aeon can be found as an Elite Boss, an Archvillain, or as a Scientist for Arachnos.

The man known as Doctor Thaddeus Aeon AQSA (Arachnos Quantum Structure Association) is without a doubt the most brilliant scientist in the Rogue Isles and probably one of the most brilliant minds of the whole planet. A metahuman genius able to work on literally hundreds of projects at the same time, he is responsible for the creation of inventions such as the NutriPaste and the Power Transference System.
Apparently, he is also the creator of the mysterious structure of unknown purpose in Grandville known as "The Web". Head of the Aeon Corporation based in Cap au Diable, as well as the governor of Cap au Diable itself, he has under his command other scientists of talent such as Dr. Forrester and Dr. Geist... who are almost as crazy as Aeon himself.
Aeon is also known for having developed the Rogue Isles University. Aeon University offers revolutionary courses in 'Transdimensional Shift Phasing', 'Demolitions for a Better Tomorrow', 'Cloning and You and You', and 'Power Sources: Risk vs. Reward'.
Doctor Aeon is also the founder of Architect Entertainment, a company that brought with it the Mission Architect, through which citizens of Paragon City and the Rogue Isles can create and experience untold multitudes of virtual realities.

His less virtuous activities include the killing of an indeterminate number of citizens of the Rogue Isles in his futile attempts to create superpowers, being among the victims the Thermopolis, parents of the young heroine Pyriss. Dr. Aeon is also involved in the creation of the superpowered villain known as King Midas, whose Goldbrickers have been plaguing Cap au Diable for some time now. He is also known to have thrown people into the Shadow Shard for no real reason other than his mind tells him to.


His enemies include the fanatical Luddites from Cap Au Diable, the Arachnos Marshal for Cap au Diable, Leon Brass, and the mysterious man known as Professor Echo. Recently, the Television became a new adversary after forcing Dr. Aeon into writing a scientific report encouraging everyone to watch more television.

Doctor Aeon is a cowardly man, but he can be a very dangerous if he's found with his combat armor on. That technological jewel allows him to use huge amounts of energy in combat, in melee or at distance, can envelop him in an energy field and can even create copies of himself, which, while not as strong as the original, are still very strong.

Heroes will find him in these missions: 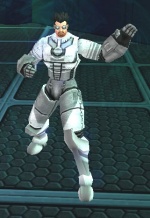 In combat armor,
as enemy

Praetorians may find him in the following missions:

An unethical scientific genius, Dr. Aeon is not a man to be trifled with. Some think he may soon become a major player within Arachnos, assuming he survives the plans of his enemies.

Aeon Special is the special forcefield power Dr. Aeon uses as an Archvillain from the Statesman's Task Force. While it is up, he is impervious to all damage. Usage of the Power of the Thorn is required to disable the shield temporarily. Summon Clones allows Dr. Aeon to summon many Elite Boss versions of himself from other dimensions. These Aeon clones' powersets are listed on the Arachnos page.

Stupid drones! Do I have to do EVERYTHING myself?!
...I'm not supposed to do everything myself!
Praetoria... looks pretty nice. This Berry knows what he's doing.

Ah, a Praetorian! This will be an excellent test of my new Aeon Field!
Drones!
Eradicate this Praetorian!

During the mission Fight back Rikti attacks he will be found after being captured by the Rikti, inside the PTS control complex:

Rikti soldier: Trick Use: Negative
Dr. Aeon: I'll... I'll tell you everything you want to know, if you spare me!
Rikti Magus: Status Query: Entity Bat'Zul?

Once free: Uh, I was just about to, uh, trick them, yes.
Well, never mind. We've got to shut down the PTS before it esca...
um... aah...
Explodes! Yes, before it explodes.
Just help me get to the main control computer!

At the PTS computer: Right, that's taken care of and I'm out of here!

If refound: Yeah, you alien scum are lucky Character is here to hold me back!

During the first Capture Dr. Aeon mission (the second mission in the Statesman Task Force), he is the main objective of the mission:

During the first cutscene, he will show up dressed in scientist clothes and will flee through a nearby portal:

Soon after, once at the other side of the portal, he will laugh at his pursuers in a second cutscene:

During the second Capture Dr. Aeon mission (the fourth mission in the Statesman Task Force), you'll finally engage him in combat:

Before combat: Heroes! In my inner sanctum? This is inconceivable!
Fortunately, I have my impenetrable force-field to make me invincible!
Engaging temporal displacement device!

At 75% Life: My force-field was scientifically perfect! How can this be happening?

At 50% Life: You, heroes, with your primitive minds! You're stupid! Stupid!

At 25% Life: I took all variables into account! This is inconceivable!

Defeated: It doesn't matter...
You'll never have a chance against Recluse.

After defeating a player: Based on empirical evidence, I conclude that you suck!
If I were your a professor, I'd give you an "F" for effort.
Ha! I hypothesize that you have just been "Aeonnihilated"!