(There are no details for this contact. Please see the introduction mission instead)

No one knows who the Golden Roller really is, only that he gets his name from the sleek gold luxury car he drives around Cap au Diable. The word on the street is he's a troubleshooter for the Gold Brickers, the high-tech thieves that plague the island.

I don't know you. Step away from the vehicle. You want an introduction, I suggest you talk to Dmitri Krylov. He's one smart cookie.

Hello Character. Pardon me if I don't leave the vehicle, but I prefer to keep my business dealings anonymous. You can understand, yes?

You've got enough going on. Talk to me when you get rid of your current load.

Satisfactory work, Character. I think I can work with you. You should call me regularly. And check out my store!

Pure gold! I appreciate your hard work, Character. Here, take a look at my store.

This is a golden hubcap given to you by Golden Roller after you helped him and the Gold Brickers steal some new tech from Crey in a tale called:

The word on the street was that Crey has been developing some new technology that Dr. Aeon has been helping with. The Gold Brickers wanted a piece of that action, so they needed to snatch one of the Crey scientists on the project. You broke into one of Dr. Aeon's labs where the Crey scientist known as Dr. Cambrian was vising and kidnapped him, bringing him back to Golden Roller for interrogation.

The scientist revealed that a Crey laboratory in Paragon City was developing a new type of micro-circuitry that could be used in clothes and light armor. The Gold Brickers were very interested in getting ahold of this technology, and so commissioned you to secure transport to the mainland by clearing out a cargo ship infested by Lost.

Taking the transport to Paragon City, you made your way to the Crey building in Kings Row. Breaking into the facilities, you managed to secure the encrypted research data and the decryption device.

My associates have discovered that Crey Industries is developing a new technology that could come in quite useful. The first step is finding out where the device is. My sources tell me that a Crey scientist involved with the project is currently visiting one of Dr. Aeon's labs. Infiltrate the laboratory and kidnap Dr. Cambrian.

Try to minimalize casualties if possible. We don't want Arachnos coming after us!

Quickly get to the Crey scientist before he leaves Dr. Aeon's laboratory!

The smell of ozone pervades the air

Upon Exit of Mission

Dr. Cambrian is whisked away by some Gold Brickers!

Arachnos 3: "What have you heard about this new Crey technology?"
Arachnos 4: "Not much. They've been pretty quiet."

Before combat:
Arachnos soldier: "Settle down, Dr. Cambrian."
Dr. Cambrian: "Is Dr. Aeon late again?"
Combat start:
Wolf Spider Huntsman: "We're under attack! Get them!"
Upon capture: "What are you doing? Help!"
If recaptured by enemy: "Whew! I thought I was a goner!"
If lost: "Must find a way to escape..."
If refound: "Ah! Not you again!"
Upon reaching exit: "Crey Industries watches over its employees! You'll see!"

Fine work, Character. It seems that Wyvern came across the same information we did, and made a move to stop it falling into the wrong hands.

Excuse me while I 'persuade' Dr. Cambrian to tell us more about the new Crey technology under development.

With regards to that new Crey technology coming out, we 'persuaded' the Crey scientist you kidnapped to tell us what he knows. Crey's working on some state of the art micro-circuitry which can be incorporated into clothes and light body armor. This is exactly the kind of technology my associates would like to get ahold of for themselves.

The main Crey Industries laboratory developing this micro-circuitry is located in Paragon City. However, we need to secure a cargo ship to take to the mainland. We've found one that's infested by Lost, but would be a good vessel otherwise. Go in and clear out the Lost from the cargo ship.

Once the vessel is cleared of Lost, we can take it to Paragon City.

The cargo ship isn't cleared of Lost yet. Get on that.

Within the holds of this massive cargo ship, shadowy figures trudge along.

You cleared out the cargo ship!

Before combat: "The time of change is coming!"

Combat start: "You cannot stop us! The world will be ours!"

Nice work, Character. We should be able to take the ship into Paragon City undetected.

Listen up, Character, because this is the big score. That scientist you kidnapped revealed that a certain Crey lab in Paragon City has been developing some new micro-circuitry that my associates would like to get their hands on. We have a transport vessel to get us there since you cleared out that cargo ship.

Now the time has come to make our move on the Crey building itself. Break into the Crey office building and steal the micro-circuitry research data.

My associates strongly desire this research data. Don't disappoint us.

You haven't left yet? I must stress the importance of the research data!

You make your way quickly to the Crey building. There are too many heroes in this town.

You stole the research data and decryption key!

Upon Exit of Mission

You board the cargo ship and make your way back to Cap Au Diable in the Rogue Isles.

Combat start: "Ha! Without this decryption key the research data is useless!"
Upon defeat: "..."
"I think I said too much..."

You found the research data.

You found the decryption key!

Excellent work, Character! This micro-circuitry research data can go a long ways towards giving the Gold Brickers the edge in Cap au Diable.

You heard about Bloody Bay? Arachnos is recruiting villains there to fight against the heroes coming in from Paragon City. Go talk with the Arachnos Warzone Liaison for Bloody Bay over in Cap au Diable.

The Arachnos Liaison will give you an appraisal of the situation in Bloody Bay. You can then make the choice whether you want to get involved or not.

So how's the situation in Bloody Bay? Bloody, I'm assuming.

I've heard a rumor about an Arachnos Fortunata Seer who's looking for freelancers of around your level of power to handle some jobs for her. Word is that Ghost Widow and the Wretch are involved somehow. Could be dangerous, could be profitable. Either way, I can set you up to meet with her.

This is just an introduction. You don't have to do her tasks, but I hear they may be pretty interesting.

During a heist a team of Gold Brickers got nabbed by a group called Wyvern, a bunch of freelance vigilantes who stick their noses where they don't belong. We need someone to go in to the Wyvern Hideout where they're interrogating the Gold Brickers and break them out.

Make sure you get the Gold Bricker boss out, a guy by the name of Flashbang. He's the most valuable of that lot. 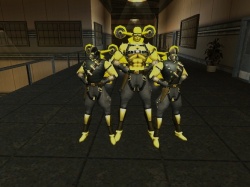 At the mission exit:

Good job. The last thing we need is Wyvern learning Gold Bricker secrets. Satisfactory work, Character. I think I can work with you. you should call me regularly. And check out my store!

Here's a big score. Ever heard of Dr. Carl Egon? He was a brilliant scientist that came to the Rogue Islands in the late 80's. Unfortunately he got on the wrong side of Randall Kirchoff, the governor of the island at the time, and the two became bitter archenemies. It ended when Egon created an interdimensional rift in the governor's watchtower and released a bunch of aliens that tore Kirchoff apart. Arachnos was forced to go in a and mop up the aliens, while Egon was captured and executed for treason.

It was rumored that Egon had a lab hidden somewhere in the Rogue Islands that contained his high-tech wizardry, including his infamous D-Rifter that caused the massacre at Kirchoff's tower. The problem was that no one was able to find it... until now. We think we've found it here in Cap au Diable, and the Gold Brickers want that technological goldmine! The D-Rifter has been shifting Egon's lab through dimensional space, and it's only a matter of time before it 'jumps' again. The Gold Brickers will go in to salvage the tech once the lab is secured.

You have 90 minutes to complete this mission.

There's been a lot of mysterious disappearances associated with Egon's lab. There's no telling what you may find in there.

The air seems charged with weird energies. There are sounds of battle coming from within

Excellent work! The Gold Brickers will secure the lab and start harvesting the technology it has to offer.

Longbow has been watching the Gold Brickers like hawks lately, waiting for them to slip up. The Gold Brickers have a major heist planned, but they need a distraction - that'll be you. Plant these bombs around one of the power transfer systems. We'll send an anonymous 'tip' to Longbow letting them know that you're up to no good.

The bombs have been loaded on a truck. The truck will take you past the perimeter security. From there you're on your own.

The constant thrum of power emanates from the power transformers

You set the bombs at the power transfer station!

The bombs caused enough of a distraction to allow the Gold Brickers to pull off their heist. Nice piece of work!

Have you heard of the Luddites? They're a bunch of insane anti-technology fanatics that lurk around Cap au Diable. Of course, this means they often come into conflict with my associates. There's a shipment of parts coming in to port here in Cap au Diable, and word is that Luddites have some vigilante working with them to sink it before it gets to port. Take out the Luddites that are attacking the cargo ship.

Get out there before our ship is sunk.

The sea winds whip the ocean into a fine spray. You pull up alongside the cargo ship and prepare to board.

Before combat: We must not let these villains prevail.
Combat start: Watch out, my friends! Character is dangerous!

Very good. My associates were in desperate need of that shipment.