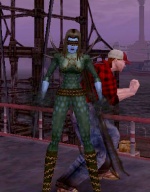 Sea Witch is a Hero for the Scrapyarders.

The Sea Witch is a hero from the Rogue Isles possessing elemental powers of the storm. She has been causing problems for the villains of the Rogue Isles for many years, including the destruction of many Family smuggling vessels including the Carpe Diem. She has been identified in a romantic relationship with the Scrapyarder Iron Billy and takes any attack against him highly personally, something which a number of her enemies have used to lure her into ambushes on occasion.

In the first encounter Defeat Sea Witch, she's using a gang of ghosts to interfere in Mr. Bocor's bussiness in Port Oakes' docks:

Before combat: "My friends, you have done well. Port Oakes' shipping has slowed to a crawl."
Combat start: "So, Character. Somehow, I thought Bocor might send you."

In the mission Defeat the Luddites she will be supported this time by the Luddites from Cap au Diable, causing trouble for the Goldbrickers there:

Before combat:
Combat start: Watch out, my friends! Character is dangerous!

During the mission Take down Sea Witch, she will be enraged at the kidnapping of her boyfriend, and has her own cutscene: