Within a fortress-island forged of iron and fear they had been trained to hate us and to fight against us for generations. Their Goddess demanded it, and they obeyed her in all ways. They believed that their chosen place upon this world was to serve as the righteous implement of her will, and in their deeds and customs did they enshrine this so that to do otherwise would be unthinkable.

The path of the Mu is the path of denial of the worthless self, denial of all that would blind us to our service to our Goddess. She who shaped us, She who taught us, She who must be obeyed! Lord Recluse was a fool to think he could control the blood of Mu for his own ends, and Scirocco was even more a fool to think he could send the path to the Goddess to Arachnos' technicians to pick apart. The true powers of Mu will soon be unleashed! 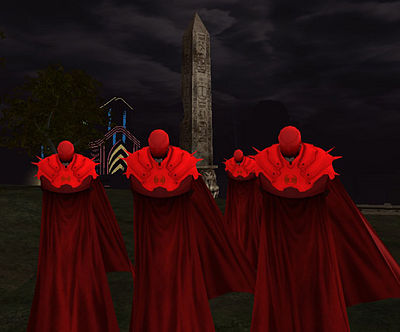 Mu is a name that is used to describe both an island and an old civilization strongly focused on magic. It was nearly destroyed during a war against Oranbega and today, though its descendants are numerous, many of them are still unaware of their legacy. A legacy that puts them in a mortal danger:

The history of Mu starts back at the most unsuspected place: Oranbega, about 14000 years ago. In those days, Oranbega had enjoyed a period of peace and prosperity for many years, until the coming of Mu'Rhakmet's rebellion. Mu'Rhakmet demanded the Oranbegans' return to a total subservience to the gods of the past. He gained followers among those who felt disaffected by the Oranbegan civilization, and among those who were disenfranchised by a lack of skill with magic. It began small at first, with attacks on Reasoners and Philosophers, and then progressed into street riots and open conflicts. Soon, Mu'Rhakmet's followers held banners with his stern visage everywhere, demanding that the people of Oranbega return to the worship of the gods they had so long forgotten.[1] Not until it was too late did the Oranbegans learn that there was another force behind the rebels. That Mu'Rhakmet practiced as he preached, and was in truth the earthly instrument of she who had forced the Oranbegans' ancestors across the sea: The goddess Hequat. She who had turned upon her lover, the Divine Teacher Ermeeth; she who had rallied her followers and forced the Oranbegans from their lands; now she had found them again and sought to undermine their society. Soon Oranbega was engaged in a civil war for control as those loyal to Oranbegan principles fought Mu'Rhakmet's followers in the streets of the city.

Ultimately, Mu'Rhakmet's rebellion failed. The Oranbegan histories say that Mu'Rhakmet and his followers fled across the sea. The Oranbegans assumed that they had returned to the old lands of their goddess, and this assumption would lead them to disaster. For what they did not know was the Hequat had provided a new land for her people. An island risen from the sea, an island that she would call Mu.[1]

But another race, the Coralax, already lived on the island of Mu before it was raised from the sea.[2] There was then a great war between the ancient Mu civilization and the Coralax. In the war, the Leviathan was called forth by the Coralax High Priest, Calystix the Shaper.[3] The Leviathan threatened to devour all the Mu, and it was only through the intervention of the Mu goddess Hequat that saved the Mu. She turned it into coral and trapped the Leviathan beneath the Island,[2] underneath what is now known as Sharkhead Isle.[3]

Mu then flourished, instructed by Hequat to hate the Oranbegans and to fight against them for generations.[4] They believed that their chosen place upon this world was to serve as the righteous implement of her will, and in their deeds and customs did they enshrine this so that to do otherwise would be unthinkable. At her command they performed generations of what would now be called eugenic breeding in order to strengthen the magical power within their blood lines to unheard of levels. At her command they crushed all contrary thought, and made no art that did not praise her name.[4] At this point, in Mu, all men were sorcerers, as were all women and children.[5]

Eventually, and at their Goddess' command they attacked Oranbega on a spring day,[4] thinking they would be an enemy too weak to fight back.[5] The initial stages of the war were a complete success for the Mu: the first few days of the conflict, Mu Skyships rained a magical fire down upon the outlying Oranbegan cities.[6] The surprised Oranbegans took drastic measures: they sank their city beneath the earth to shelter it from bombardment by Mu sky ships.[4][7] But Mu kept pressing, and then, the Oranbegans turned to other powers from darker worlds. A Prince of Demons came to them and offered his aid. The Circle of Thorns, the ruling council of Oranbega, debated greatly, but in the end they bargained with him.[4][7]

Things started to change then: the demons' first gift to the Oranbegans was the Thorn Blades, demon swords that turned men into blood-frenzied monsters. Armed with these they turned the tide, and the slaughter was indescribable. But Mu wouldn't surrender: The wizards of Mu found new tactics, however, and blunted the Oranbegans' attack. Again they struck bargains with the Prince of Demons, and they brought forth troops to fight on their behalf from the depths of Hell. With wraiths and spectres did the Oranbegans march upon the Mu. With Behemoths of the land and Leviathans of the sea did they fall upon their men, their city, their very land. The fiends had bargained for the slaughter of every last man, child, and woman of Mu, and on that fine point the Oranbegans faltered.[4][7]

The long lost vaults of the fabled Mu: For thousands of years no human being would set foot on them again

As the demons fell upon the last survivors of Mu, the demon-thralls of the Circle of Thorns were held back by the Circle's own, when the Oranbegans felt mercy. Then a demoness general called Lilitu rose from among the horde, and told the Circle mages to stand away. She said that the deal with the King of Demons was for the utter destruction of all the people of Mu. Still, the Circle mages protected the children and the elderly of the Mu who were their enemies. Their power alone hold back the horde until their great negotiator, the wizard Akarist, could arrive to bargain for the Mu's lives. And still Lilitu shrilled for the Mu's deaths, and warned of the dire fate that would befall all of Oranbega unless the contract would be upheald and the demons allowed to spill the last drop of the blood of Mu.[1]

Akarist did not arrive in time to the bargain,[1] but the Oranbegans let some Mu escape to far shores. When the fiends discovered this, they were both outraged and gleeful, for they had hoped for just such an outcome.[4][7] The Oranbegans would pay dearly for their mercy, and in the end, the war ended with no clear winner and both civilizations decimated. Still, Mu had survived.

A second veteran: The demoness general Lilitu, who sought to destroy every single Mu inhabitant

There is no mention of what happened next to those survivors, but it seems clear they managed to prosper and multiply, though not as their own civilization any longer. The Island of Mu became a myth and hasn't been found still today, leaving behind only minor evidences such as personal weapons, still charged with mystical energies despite the milennia passed, or the sand of Mu, described as "black volcanic sand that has an eerie dark glow around it when held in the light" found by Baron Zoria himself in 1921,[8] though there are evidencies that Mu was once the name of what we call today The Rogue Isles.[9]

As for the descendants of the people of Mu, nearly every magical hero, seer, mystic, wizard, witch, sorcerer, medium, and channel of today is one.[10] Numbered in the millions, some sources assure that they could be as many as one fifth of the worlds' population (more than a billion people).[11] Many of them are unaware of their legacy, which puts them in a great danger:
Their ancient enemies, the Oranbegans, have survived to the present as well, as have the demons of those days millennia ago which took part in the war. Having lost their bodies as a side consequence of their failure to complete the bargain with the demons, the Oranbegans know that should they destroy all of the Mu, the bargain will be reversed, and they shall have their old forms returned. This knowledge has fanned a long-forgotten desperation among them, and now they draw plans against those descended from the Mu.[12]

They have powerful tools at their disposal to do this. The Codex of Bloodlines (also known as the Blood Tome) is a magical book that can trace a person's ancestry back to the time of the powerful pre-historic magic users.[13][5] Armed with such artifacts, advised by demons[12] and tempting any power-hungry Mu descendant they find with the Spirit Thorns,[14] the Oranbegans hunt down the Mu descendants trying to complete the bargain. There's another added benefit of the hunt: the bodies of the Mu descendants have strong magical potential, and the Oranbegans want the bloodlines. The more Mu blood, the more magical power. It perfectly suits their needs.

Still, not all the descendants of Mu are unaware of their powers and wait the sacrificial knife of the Circle quietly. Some are heroes by their own right and can defend themselves perfectly. Others, instead, have a much more aggressive approach to this issue and aren't afraid to use their powers for personal gain. Arachnos somehow learned of the descendants of Mu and their potential, and formed a division of troops with them: The Mu Mystics, and has recently put them under the command of Scirocco. They are a relatively new division in Arachnos' web but early evidence indicates they may well be one of the most powerful. Their part in the Paragon City Power Crash raises their potential threat rating to the highest levels.[15]

Among the actual Mu descendants of today there are some notable ones. From among the ranks of the Mu Mystics of Arachnos, there is one called Mu' Drahkan who seems to be a prominent political leader of considerable magical power. The other, called Tarixus is a spirit living in Sharkhead Isle who may have been alive perhaps since the days of the war with Oranbega. It is unclear if he's serving Arachnos currently, but it is known that he has a long history of enmity with the Circle of Thorns.

Despite the harsh discipline in Arachnos' ranks, there is what it seems to be a fundamentalistic Mu faction among them[16] of mystics who long for the return of their goddess Hequat and, like their ancestors of old, serve her above any other thing, Arachnos, Scirocco or Lord Recluse included.[16] No one knows what would happen if the goddess would return to the modern world. However, it must be remembered that her hatred stemmed from the Oranbegans' refusal to bow down to the gods in all things, as she thought was proper for mortals. That aspect may bode ill for today's peoples and cultures.[17]

In-game, a player villain may gain some of the mystical powers of the Mu by choosing Scirocco as a patron, which will grant him access to the Mu Mastery patron power pool.