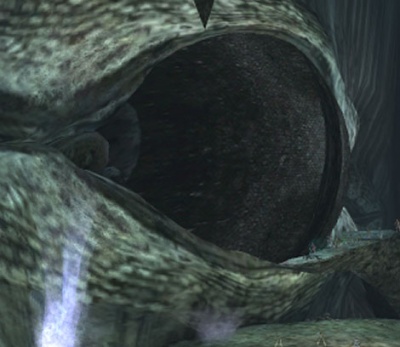 The history of this entity starts back at the beggining of the Mu/Oranbega war, 14000 years ago.[1] In those days, Oranbega had just suffered a civil war and those who lost, the faction demanding that the people of Oranbega returned to the worship of the gods, were forced to flee across the sea. It was then when the goddess Hequat provided this her people a new land. An island risen from the sea, an island that she would call Mu.[2]

But another race lived on the island of Mu before it was raised from the sea: the Coralax.[1] There was a great war which occurred between the ancient Mu civilization and the Coralax. In the war, the Leviathan was called forth by the Coralax High Priest, Calystix the Shaper.[3]

Calystix sought to unleash the great leviathan to devour the Mu. It was only through the intervention of the Mu goddess Hequat that saved the Mu. She trapped the Leviathan underneath what is now known as Sharkhead Isle,[3] transmogrifying the Beast into coral,[4] though Calystix managed to escape into the sea.[1]

The Leviathan remained entombed under the island and unmolested until mid 20th century, when Kirk Cage bought most of the land of the island and the Cage Consortium started its mining operations in Sharkhead. Shortly after the vicious Slag Golems were seen for the first time. The Golems actively and violently oppose the Consortium's attempts to mine deeper inside the island, thus preventing them from finding the sleeping beast accidentally.

But others like the Circle of Thorns or Captain Mako are interested in the Leviathan as well, and they have a much better understanding of the beast's nature, making them much more dangerous than the Consortium.

There are even more factions involved in the history of the entity: There are evidences of a cult called the Cult of the Shaper, which has been trying to awaken the beast since the days of the Roman Empire at least. Historical records have found references to this cult in ancient Rome, during the Middle Ages, the Enlightenment, and in America during the 1920s. In all cases excepting the last, the cult was lead by a priest called Calystix.

It should be noted that in each attempt, it was said that the cult sought to sacrifice the life of a particularly wicked and important individual to show their god or goddess that humans deserved to be destroyed.[1] The cult seems to still be active today, and it has lately infiltrated the Freakshow. 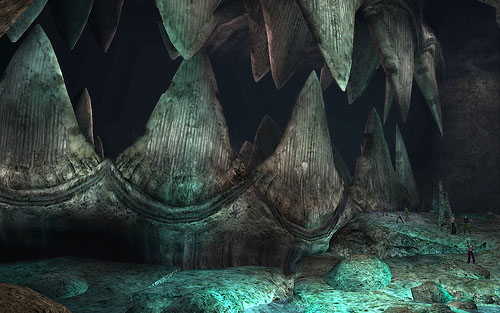 The Leviathan itself is asleep but alive. Deep under Sharkhead Isle's surface, there is a cave called The Temple of the Waters - an elusive place where an entity called the Eye of the Leviathan can be found. This great eye is made of living coral and is reputed to possess powers of the ancient sea goddess Merulina.[4] This Temple can be found using an item called the Coral Key, which is meant to act as a compass, showing the possessor the path to the Temple of the Waters.[4]

In Sharkhead's entrails, there is also another place called the Cave of the Shaper (which may or may not be part of the Temple), where there is a chamber called the Maw of the Leviathan. In that chamber there are Primal Runes on a tooth which is normally hidden from sight. Enacting a ritual called the Ritual of Z'kron on the Primal Runes, the primal essence of the Leviathan can be transferred to a given subject.[5] It's a dangerous game, as these primal energies can just as easily destroy the wielder as they can grant them power.[6]

Still, there are some who pursue these places and its power: The villains Captain Mako and Barracuda seem to be especially interested in these places. They seek to unlock the primal essence of the Leviathan and steal the mystical energies for themselves. The Circle of Thorns desire the primal essence for themselves, as they believe they can harness it for use by their demon masters. Aside from the inherent dangers there are still the Coralax and the High Priest Calystix, who protects both the Temple and the Cave from any human incursions and has enough power to awaken the Leviathan (partially and temporarily) if the need is great.

A grim prophecy, the Tokarii Scrolls,[7] warns that one day the Leviathan shall awaken and devour everything in his path.[3]