Maybe we should consider using redirects in the case of badges that only change names when switching sides? Then perhaps adding a section for "Alternate Names" or something to that effect to indicate the name appears one way for Heroes, another for Villains, possibly another for Praetorians (and possibly alternate gender-based names.)

I've posted a thread about this in the Titan forums. After I found my third alternate badge name, I decided I shouldn't be updating until we figure out what we're going to do. (-: Take up the discussion in that thread. --GuyPerfect 19:17, 17 August 2010 (UTC)

In case you go looking for it later, I moved your ZoneTest template from June 2007 from template space to userspace: User:GuyPerfect/ZoneTest. -- Sekoia 03:57, 6 September 2010 (UTC)

Or evening, or night, or whatever time is in the USA right now! =P

Cleopatra has minor resistance to all damage. Try to keep entity documentation to what powers they DO have rather than the ones they DON'T

Just saw your comment about Cleo. She does not have any base Resists. Period. She does have High Pain Tolerance, which grants her some resists, true, but the Reists in the Enemies section have always been referred to the Base numbers. In some cases mobs have base resists plus some more from passive powers, and sometimes even more from toggles. The Rogues Gallery has some good examples of nice Base Resistances. So it's important to keep them separated: Base, Pasives and Toggles. And in this case, Base Resistance for our friend Cleo is Zero. Rien. Nil. Un cerete.

Besides, I don't use those shiny PIGG files. I like better the in-game info: I check every single mob, every attack, every resist. So I need an icon like that for those who don't have any reists at all, just not to waste time checking the same mob half a dozen times, especially in the case of unique mobs as this gal, which are hard or difficult to fight or find.

Just to clear the matter, I'm uploading the screenshot I used to get the info. Take a look and feel free to delete it once you have checked it.

Enemies that have built-in resistances generally have an auto power called Resistance. I don't know what this shows up as in the Combat Attributes window, but it's mechanically identical to High Pain Tolerance et al. There is a discussion in the forums regarding the use of documenting non-powers for entities: No Melee attacks --GuyPerfect 02:00, 20 October 2010 (UTC)

If you feel there should be a badge page with a full list of the badges, feel free to create it. See example: Halloween Event/Badges. ~ AGGE talk/cons 03:38, 18 December 2010 (UTC)

Haha, I liked your edit note. I've never seen the plaque, I just copied its description from the TPN page, after I noted the plaque was a wanted page. I wasn't actually 100% sure it existed, but I guess it does, so that's good. Felderburg 17:22, 31 August 2011 (UTC)

I figured there was a good reason to not have the location handy, so no worries. It was just a strange sight seeing that kind of partial documentation, so I had to say something about it. (-: --GuyPerfect 17:59, 31 August 2011 (UTC)

Thanks for the Hammer, Guy. I really don't think that I have done that much yet (in fact, since I am learning about this stuff I had assumed I messed as much up as corrected)! It is so nice to be recognized for what I thought was rather insignificant work so far.  :) --Thirty7 08:03, 18 October 2011 (UTC)

Hey there, not sure if you're the best one to talk to about this, but here goes: I can't seem to access the Titan forums. I've been away from game and all things related for a while, and when I tried to log back in to the forums, it said password security had been upgraded, please enter it again. I entered it again, but it didn't like my password. I used the "forgot password" link to get something sent to my email, but nothing's come in so far. I can log in to Titan and the Wiki just fine, but not the forums. My forum user name is also "Felderburg". Felderburg 18:45, 29 December 2011 (UTC)

Cleared all cookies and cache in Firefox, still didn't work. Tried logging in with IE (I know, I know, only other browser on the compy) and that didn't work either. I can log in to CoHTitan proper, but not the forums. Those are the same account, right? I suppose it's also worth noting that the account management page that I go to on Titan log in displays that I have CIT and CoH Faces linked to my Titan account, but not the Wiki. Felderburg 17:36, 30 December 2011 (UTC)

You might have to jiggle your password. Log in and change it, even if you change it to the same thing. I remember something about a hash value not being stored in the user table. --GuyPerfect 20:15, 30 December 2011 (UTC)

I just went through and bot-nuked all instances of {{PAGENAME}} out of the main namespace and the Mission namespace. {{PAGENAME}} is something that's useful for templates, but just doesn't make sense in content namespaces. And in fact, it can be harmful. It's not obvious that it's in use, so when people port content -- say, from a contact page to a mission page -- it doesn't get updated. Thus you end up having articles show contact names like "Mission:Broker - Rob Atlas Park bank". -- Sekoia 07:43, 17 April 2012 (UTC)

Not sure what's up with this- there is an enemy page that seems to have gotten slightly concatenated with your User page:

Good eye, but it's actually just a mockup. The enemies documented there are the Incarnate Tsoo, and I used the sub-page to ask about it on the forums. All the enemies are slightly different If you go digging around in my user pages, you'll find all sorts of weird crap. (-: --GuyPerfect 23:31, 23 May 2012 (UTC)

You made a comment wishing that they weren't made... is that due to the work you just did... or meant as a slight to those folks who set them up incompletely? —

I have to ask, because I have been curious for some time now. It seems most all of your characters are outfitted in a rather unique collection of colors (I guess neon would be apt)... and I was wondering if there was any particular "why" to you choosing that color scheme. I mean, it certainly is distinctive, that's for sure!

I call him the pastel king. I can recognize screenies of his characters with near certainty due to color scheme.

For sure, Agge... and it is that reason alone that made me ask. All of Guy's characters are distinctive and highly recognizable. I could never really mistake one of his screenies for anything else than one of his. I just thought there might have been a deeper reason for the almost trademark of colors he seems to use. Also, Guy, I want to point out that I think your *-cand line of characters are pretty nifty looking, especially the original of the Toxic variety.

(Oh, and for the record... I try to always use more than two colors in my costumes! Though the closest I get to bright is probably Twostripe) — 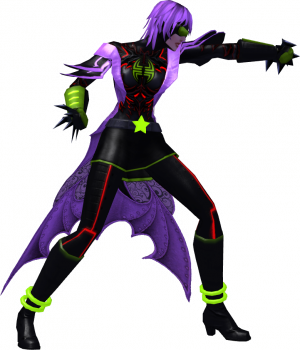