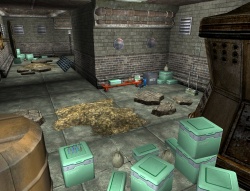 Looking at the pavement one day and becoming overwhelmingly curious as to what lay beneath, Bob the Biohazard decided to dig down and dig deep to see what she could see. Much to everyone's utter surprise and amusement, she dug straight into a peculiarly isolated chunk of sewer and fell in. Spotting a nearby lever, she pulled it and the hole in what was now considered to be the ceiling was sealed shut and it was like it never happened. If it weren't for the quick thinking of Slash Ragequit, who flushed a base portal down the toilet, Bob would have been stuck down there interminably.

The area became a paradise of sorts for the enterprising crew, as it granted ample storage for all of their goodies and it meant that they no longer had to entrust their valuables to the people whose job it was to run auctions. It's like an oversized closet in a way, but when all it took was a shovel and a toilet, you really can't beat the price. The floor is littered with crates and sacks filled with items of all sorts, and a work desk in the corner for making treasures out of trash. And producing more trash. Try not to trip on the soda bottles laying all over the place.

Little Elmo is secretly a magpie who can't resist rare salvage and likes to collect it every time one falls out of the face of someone he just punched. He's even known to jump into the playpen at Architect Entertainment just to gather enough tickets to buy more. He's not much into recipes, though. That's Crypto Cadabra's job. Crypto spends a fair amount of time and effort just earning tokens for the lottery of all things. What comes out is what gets crafted, and sometimes it doesn't suck so bad. When the Enhancements are ready, one of two things happens: either they're stored in the closet, or sold on the market and the proceeds are stashed in the safe in the closet.

Thanks to a misguided curiosity of subterranean novelty, every new character that joins the pact is taken care of in full in the Enhancement department.

I never thought I'd see the day, but it seems that sometimes I don't always like a character after I get it to level 50. If I don't find it fun to play and if there's a suitable replacement, it goes into the Bit Bucket.

Magic Mastermind. This is the second character I ever created, shortly following in the steps of Crypto Cadabra. This was the character I learned the game on: the rough road to success in the Rogue Isles, the brilliant writing in the story content, the way that once you pick a Patron set you're stuck with it forever... This was my first City of Villains character, and my first level 50 Villain to boot. After Bob the Biohazard came into existence as an experiment to make a petless Mastermind work, a secondary build was made that was petful so that I could actually play some game content while preparing the petless mode. After breaking down and finally deciding to properly frankenslot the petful build and use it, I saw Mastermind from a completely new perspective. Crypto here was Robotics/Traps, and it was a snooze-fest with its survivability. I made it a "Tankermind" to draw aggro onto my untouchable self while the robots did all the damage. Bob's Thugs/Poison build couldn't do that, and I found myself supporting my henchmen in combat rather than the other way around. Knowing that this was the true design for the Mastermind, and since it was the only archetype of which I had more than one character, the decision was made to make Crypto click the big logout button in the sky.

Natural Brute. This was chronologically the third character I created (that lived to see level 50), and it was made purely on a whim. The idea was that I would make a character that would have to refill on the Holoraphic Projector and Nictus Gravitic Emanation powers and, looking like a Council Galaxy soldier, punch things to smithereens (hence the name). Unsurprisingly, the constant fetching and re-fetching of the Nictus powers proved too cumbersome to bother with, so I just went on my smashing way. The character's Super Strength/Willpower build was remarkably effective, and it got to 50 pretty much solo through normal gameplay in about three weeks' time. I never grew too attached to it, because it was playing the game on boring mode: being so efficient frankly doesn't leave any room for anything of interest. Eventually, Little Elmo came along to act as a money maker to slot up Bob the Biohazard's exotic build, but once everyone wound up on the same server, I ended up with two Brutes and only one that I liked to play. Although Galaxy Brawler was the one that got the axe, it was still a good learning experience, and today it continues to baffle me how people can min/max their builds even moreso than this one was and do it character after character after character... It'd bore me to death.

Science Corruptor (Katharsys) and Defender (Kompashun). The two were created with novelty inspiration at the release of Issue 13. The two characters were roughly identical save for some archetypical, powerset and aesthetic differences. You gotta take this in context for the time period... Back then, people were still stuck under the thumb of the "Holy Trinity" (tank, damage, healer) and if you were Empathy, you were a slave. I figured Pain Domination would be a good way to be a healer without being thought of as a h3410r, and the lovely red Electrical Blast had just been given to Corruptors not long ago, so there you have it. Eventually curiosity got the better of me as to just how Corruptor and Defender differed, and since there was blue Electrical Blast on the other side (to pair with Empathy), it was too good to pass up. Well, I learned that the archetypes are in fact very different, and tediously pressed my way up the levels with low damage output. I think they both got to 50 with the Rikti Monkey farms, but I can't recall. Either way, realizing it was a bad case of "Yay, now that they're 50 I don't have to play them anymore," and the pending release of City of Heroes: Freedom, I figured now was a good time to say goodbye. Fortunately, they both had fully-frankenslotted builds, so I got a heap of toys out of them before they left.

Natural Scrapper. My first Praetorian (created on Going Rogue day) and Scrapper 50, the character was an amusing combination of shameless cliché and raw power. The costume had all the makings for something someone would make and think it was cool except for the fact that it isn't: red-on-black color scheme, demon wings/tail, horns, bones, skull motif, dark fire, etc. So much so was the joke and point therein being driven home that I went out of my way to pick up the Cliché badge from Ouroboros. As evidenced by its level 50itude, there wasn't anything wrong with the character. When I realized just how much offensive output it had, I decided to look into making it better. What I discovered was the Spines powerset, which differed from the Claws/Fiery Aura that it already had. A new build was drafted up for a different Scrapper, which was made and hit level 50 in a week's time. The new one is so much better than ol' Slashy-poo here that I can't bring myself to play this one. And when you refuse to play a character out of merit of probably getting better value from another character, it's time to use up all your respecs peeling off Enhancements and clearing the slot on the server registry.

Magic Mastermind. Designed as a sort of spiritual successor to Galaxy Brawler, this character was also planned to be my second petless Mastermind. With the unusual combination of the Demon Summoning's Hellfire Whip and Trick Arrow, it was going to be something of a spectacle, but then the rubber met the road. While trying out different combinations of powers and Enhancements, I kept falling on the same old things that Bob the Biohazard fell on to overcome certain obstacles and boost performance. Damage procs, pool attacks, Leviathan Mastery, Reactive Interface and Barrier Destiny... They all kept finding their way into the build and for all the same reasons. The character was doomed to be 60% Bob the Biohazard to start out with, and that was before the realization that Trick Arrow pretty much only brought Oil Slick Arrow to the party. The Resistance and Defense debuffs were half as effective as Poison, the Glue and Flash Arrows weren't especially useful, the EMP Arrow was unwieldy due to the Recovery debuff... I had it sitting at level 50 for a time ready to go, but couldn't do anything with it for reasons already described. And when I deleted it, I think I might have had at least one PvP Enhancement stored on the market...