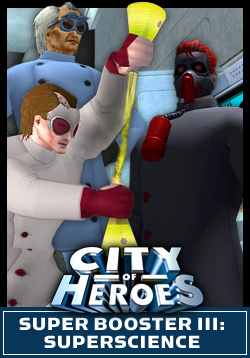 As of City of Heroes Freedom/Issue 21, this booster pack is no longer available. The costume pieces, emotes, costume change emotes, and super tailor feature are now only available through the Paragon Market.

City of Heroes Super Booster III: Superscience gives you all the tools you need to show those fools at the Institute why they should have listened to you! Super Booster III: Superscience grants your character an eccentric new costume set, electrifying emotes to express yourself or change character costumes, and access to a new Super Tailor called the Cosmetic Surgeon. Combine these for the ultimate mad scientist transformations between genders and body types! This purchase enables these features for all characters on your game account from level 1, but the costume change emotes do require that you unlock at least one additional costume slot.

NOTE: The described scenario will only work if you have an additional costume slot available at Level 20 or through the redemption of Halloween Salvage.

They said some things couldn't be changed, but you'll show them all! So characters can change from a short, skinny civilian to a HUGE powered brute! Transform from a 98-pound weakling into a huge beast! Experience spontaneous gender reversal! These amazing things are possible with-science!

In an April 28, 2009, interview at Massively.com[1], Positron said that the third booster's theme would be "superscience".

The next Super Booster is "Superscience" so players can look forward to crazy lab experiments and even cooler costume-change possibilities than we've ever offered before.