Wellman is an efficient Arachnos Operative. Rumor has it he was once a beat cop in Paragon City, but got tired of the heroes taking the spotlight. Others say that he was a cop on the take, but Wellman is quick to quash those whispers.

Move along, Character. Unless you have spoken to Marshal Brass, I have no use for you.

Hello, Character. I've read your file, and it seems you have potential. Do your job and you might earn a position of power within the Rogue Isles.

You have too much going on to focus on my tasks, Character.

Sufficient progress. You're improving, Character. A few enhancements wouldn't do you any harm, though. I want you to take this communication device. I'd like to keep tabs on you.

Well done! You might have a future in Arachnos yet. If you want to make it far, though, you'll need the very best Enhancements.

Breakout at the Zig

This is a security guard hat taken from one of the Zigursky Prison guards. You picked it up in a tale you like to call:

Breakout at the Zig

It all started when Arachnos Operative Wellman asked you to acquire the latest list of prisoner transfers to the Zig. To do this you needed to break into a nearby Longbow base to download the list off one of their computers.

Arachnos reviewed the list of new prisoners in the Zig. In addition to the regular criminal minions, there were three villains in particular that Lord Recluse thought would prove useful: Void Ripper, Nexus 99, and Blunt Trauma. An advance agent started a riot in the Zig while you attempted to bust out the villains.

The prisoners were smuggled into a cargo ship to take them to Mercy Island. However, Longbow managed to track down the vessel at sea and secure it for transport back to the Zig. You had to board the cargo ship and defeat all the Longbow agents there. In the end, the cargo ship reached Mercy Island where the prisoners met their new life in the Rogue Isles.

You know the Zig back in Paragon City? Of course you do - you seem the type. We'd like to get the latest on who's been shipped there recently. If there are some inmates that seem promising, we'd like to free them from incarceration, if you know what I'm saying.

First off, we need to break into a nearby Longbow base and get the latest list of prisoners recently transferred to the Zig. From there, we'll decide who's worth liberating.

Here's the latest passcodes we've acquired from captured Longbow Agents. they should get you into the Longbow base, but from there you're on your own.

I've commandeered a sub here at the docks. Use it to get to the underwater Longbow base.

What are you waiting for, Character? Get that prisoner transfer list!

Longbow soldier 1: We have base penetration! Call for reinforcements!

You got the list? We'll look it over and see if there's anyone worth springing from the Zig.

Break prisoners out of the Zig

We checked out the prisoner transfer list that you stole from that Longbow base and we came up with some likely candidates. there's a bunch of criminals there that'd make good henchman material - one can never be too short on those. there's three prisoners Lord Recluse feels might prove particularly useful: Void Ripper, Nexus 99, and Blunt Trauma. We'll send in an advance agent to start a riot in the facility, then you can go in and break the prisoners out of the Zig.

Note that if you fail to return at least one of these villains, this mission will be deemed a failure in the eyes of Arachnos.

As soon as you bust the prisoners out of the Zig, we'll have a cargo ship waiting to take them to Mercy Isle. 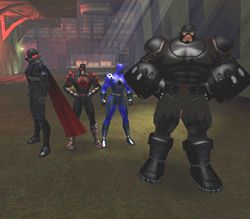 Get going! Our agent is waiting for you at the Zig!

The shouts of rioting prisoners fill the air. Chaos reigns within the Zig

You made a successful jailbreak

Longbow Officer: You're in big trouble now, Arachnos creep!
Jenkins: Maybe we can work something out?

Jenkins: Thanks, Character! Funny meeting you here again, eh?
Jenkins: Anyway, we got to take down the prison doors to get to our targets! Let's go!

Before combat, in his cell: I can use some help, Character
Once free: Thanks. You're Character, aren't you?
If left behind: Where'd you go, Character?
If refound: Thanks again, buddy
At the mission exit: Fine work, Character

Once free: Where we goin?
At the mission exit: Me go now

We showed those Paragon City fools a thing or two, eh?

We dropped the prisoners off on Mercy Island. From there, it's up to them to prove their worth to Lord Recluse.

While you were trying to break those villains out of the Zig, our Arachnos Operatives were loading up a cargo ship full of the mundane prisoners. We thought we were in the clear, but Longbow managed to track the cargo ship we were using to smuggle them to the Rogue Isles. The cargo ship has been taken over by Longbow agents trying to recover the prisoners. Head over to that ship and defeat all the Longbow agents.

Crush those Longbow meddlers. All of them.

What are you doing here? There's Longbow agents to crush!

The vessel rocks in the high ocean waves

You defeated the Longbow retrieval team!

Before combat:
Combat start: It's Character! The one who broke the Zig!

The ship got to Mercy Island alright, and you sent those Longbow forces packing. Fine work, Character!

This is a heavy, well-used sledgehammer. You picked it up during a tale you call:

It all started with a request by Arachnos Operative Wellman to prevent a Wyvern interception of an arms shipment to Paragon City. Travelling to the cargo ship, you repelled the Wyvern attack, allowing the shipment to get to the mainland.

The next step was to put a serious damper on the Boomtown reconstruction efforts. Travelling to Paragon City, you destroyed all the supplies in a reconstruction project causing a serious resource drain.

Finally, it was time to put a hurt on the Paragon's pride - it's heroes. you travelled to Paragon City and destroyed a number of statues belonging to prominent heroes.

Arachnos supports the efforts of certain rebellious factions in Paragon City by providing them with arms shipments. Usually there's enough bureaucracy involved that Longbow can't really get involved. However, that mercenary group known as Wyvern has no such restrictions.

We recently received word that one of our shipments came under siege by a Wyvern team. Head over to the cargo ship and defeat the attacking Wyvern forces.

Wyvern is a bug that must be crushed by Arachnos.

You pull up alongside the cargo ship. On board you see Wyvern forces securing the deck

Once you repelled that Wyvern attack, the arms shipment made it through to Paragon City. Nice work.

There's efforts being made in Paragon City to rebuild in the wake of the Rikti destruction. Baumton, or Boomtown as it's been called, has become one of the areas of focus. The problem is that Paragon City is a haven for heroes, and rebuilding places like Boomtown serves to strengthen their base of power. This cannot be allowed to happen. The Rogue Isles must retain its dominance, and in order to do so we must undermine Paragon's rebuilding efforts. Head to the construction site and destroy all the building supplies.

Longbow is looking over the reconstruction project, so expect some resistance.

Arachnos operatives take you from Independence Port to a truck which takes you to Boomtown. The area still smolders in the aftermath of the Rikti destruction

Excellent work! This should do some serious damage to the Boomtown reconstruction efforts.

With your help, we've caused some serious problems for Paragon City. The arms shipment you helped get through flooded Paragon City with more weapons than the criminals know what to do with. When you destroyed the Boomtown reconstruction supplies it put a serious drain on Paragon City's resources. Now we want to hurt the pride which Paragon City has in it's heroes. Go to Steel Canyon and destroy some of their precious hero statues.

Wyvern has been snooping around our operations lately, so you might see a few of those mercenaries about. Don't let them distract you from the task at hand.

You are met in Independence Port by an Arachnos operative and taken to this section of Steel Canyon by truck. Find and destroy the hero statues!

Perfect. those monuments to those so-called heroes are where they should be: in dust and rubble.

This contact has no missions out of his Story Arcs.