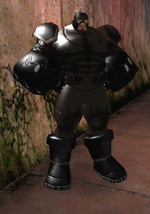 Blunt Trauma is a NPC ally you can find during the mission Break prisoners out of the Zig from Operative Wellman (CoV, levels 15 - 20). He is one of the prisoners you must help to break free out of the Zig. He will be in a cell guarded by a Private Security Captain when you find him first, and must be freed so he can help you.

Once free, he will follow you and will attack any Longbow soldier or prison guard in his aggro range. Longbow will sent at least three waves of attackers against you once you free him.

During my mission, Blunt Trauma had Pet class and hit points. He used Super Strength attacks and, despite his Bruteish aspect, I never saw him activate any secondary defensive powers, nor he seemed to be especially resistant to damage, at least not enough as one might expect for someone of his size and appearance.

Remember that at least one of the prisoners must reach the helicopter outside, so he's one of the possible mission objectives, and must survive.

Blunt Trauma hasn't much to say:

Once free: Where we goin?
At the mission exit: Me go now

Blunt Trauma is a mutant who has worked as heavy muscle for various villains in the past. He ended up in the Zig by Longbow for ripping apart a bank vault, but not before he took out an entire assault team.

I saw him use the following (Note that he could have more):

Hurl Boulder Ranged, Smash, Foe Knockback
Blunt Trauma can rip up a boulder out of the ground and Hurl it a short distance. The Hurled Boulder deals medium damage and can Knockback foes.

Jab Melee, Minor Damage (Smash), Minor Disorient
A quick jab that deals minor damage, but has a chance of Disorienting the target, especially if coupled with other attacks. Damage: Minor, Recharge: Very Fast.

Punch Melee, Smash, Foe Knockback
A Super Strength Punch is a powerful pummeling attack, and it may knock foes off their feet.

Haymaker Melee, Smash, Foe Knockback
The Haymaker is a slow attack, but it makes up for it with a greater damage and a high chance of knockback.