This article is about the Arachnos NPC. For the Hero contact, see Maria Jenkins.

Jenkins is an Arachnos NPC Ally that can be found in several missions in the whole game, always as a Wolf Spider.
To know more about the origins of the name, please visit the Ingame References page.

Heroes may find him:

Villains may find him::

During Breakout Jenkins has his own cutscene:

"Whoa... Character... and I thought we were here to rescue YOU!"
"Take the bomb and place it in the spot where you see the transparent image of a bomb."
"I'll help you clear out the other convicts so we can both make it outta here."

During the mission Beat up Jenkins and get the list:

Before combat: "Snakes, why did it have to be snakes?"
Combat start: "Hey, it's Character!
How's things going?
Why are you looking at me like you want to beat me up?"

During the mission Break prisoners out of the Zig, he can be found captured by Longbow, again:

Longbow Officer: You're in big trouble now, Arachnos creep!
Jenkins: Maybe we can work something out?

Jenkins: Thanks, Character! Funny meeting you here again, eh?
Jenkins: Anyway, we got to take down the prison doors to get to our targets! Let's go!

Arachnos soldiers are well-paid paramilitary commandos who follow orders to the letter.

Pummel Minor Smash Damage
When all else fails, you have only your two fists to depend on. 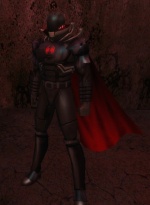 The most brutal and effective members of the Wolf Spiders are eventually promoted to Huntsmen. They're armed and armored for many situations, so tread lightly when they are around.

Frag Grenade (Ranged) Targeted Area of Effect, Lethal/Smash, Foe Knockback
Launches an M30 grenade at long range from under the barrel of your Assault Rifle. The explosion of this grenade affects all within the blast and can knock them back.

Wide Area Web Grenade (Ranged, Area of Effect) Foe Immobilize, -Fly, -Recharge
You have been caught in a web. You cannot move or fly and your attack speed is reduced.

Shotgun Ranged, Cone, Lethal damage, Foe Knockdown
Good at close range. Fires a cone of buckshot pellets and can knock some foes down.

Rifle Butt Melee, Smash
A smash with the butt of your rifle.