Agree to form a strike force

The Spider Weaves His Web
Part One
Exemplar Level: 25-34

Hello, Character. while I realize you've barely mastered the complex art of clothing yourself in the morning, I have an important task for you. Don't gawp, just listen.

Operations are in place to elevate Lord Recluse's authority in the Rogue Isles like never before. In order to accomplish this, there is one minor detail that you will need to take care of.

Back in 1963, President Marchand was a thorn in Recluse's side that had to be removed. you will travel back to 1963 and take care of him. Now, I do not think I need to remind you that discretion is key. But it's you, so I must. There can be NO evidence that leads Marchand's demise back to Lord Recluse.

MOVE, bottom-feeder! Marchand is a slippery little snake. You need to catch him before he slinks away.

To do: Add Challenge Settings Template

You have everything you need, Character. Please tell me you don't need me to hold your hand on this. I'd have to remove it first. What I'm really trying to say is, stop standing here and go there so that you can get this job done.

Marchand was smart to pick caves for a hiding place. He's slippery; no wonder he's hiding with snakes. But now that you're here, it looks like his luck just ran out.

You land the final blow and Miss Liberty crumples to the ground at your feet.
As you defeat Ms. Liberty, you notice a spark and then a note drops to the ground. Whoops. You just received a note from the Principal's office.
You defeated both Ms. Liberty AND her mother!

When discovered: Recluse thought you could use a little help, Character.
Battle Cry: You and me, let's go!
If lost: Hey! Get back here!
If refound: Thanks, Recluse will have my head, too, if you fail.

Marchand wasn't there? Well don't cry about it, I did say that time-travel can be imprecise. So quit your blubbering, it's weak.

Besides, you were able to smack around both Ms. Liberty and her mother. What could be better than that? That'll teach Heroes for interfering with destiny.

So you received a note from Recluse. Hm, I thought that might happen. Apparently, in the fabric of time there have been failed attempts in the past and Lord Recluse has had to test his followers, erm, dedication.

Actually, I'd start worrying if I were you. You're probably going to get beaten pretty badly. But...surprise me.

I see something dark and malevolent in you. Maybe you're not completely useless. Keep it up.

Head to the Underground Lair

One of the many Arachnos Spectators

Let me see that paper. Hm. It looks like you will be heading to one of those Arachnos underground lairs. My guess? A test of your dedication. If I were you, I'd stock up on - how do I say this delicately - bandages. In fact, consider the bulk size. You look like a bleeder.

Hows, this? I'll lie and tell you everything will be ALL RIGHT. Here goes, 'good luck!'. That tasted foul coming out of my mouth. Put it this way, I'm sure Lord Recluse doesn't hold a grudge. Much.

Just be yourself, aim below the belt, and bob and weave. Scratch that. Be someone who will survive the trial. Don't be you.

If Lord Recluse is willing to give you a second chance, you should consider yourself lucky. He could have just had you eliminated. It's what I'd do. See? Bright side. Off you go. 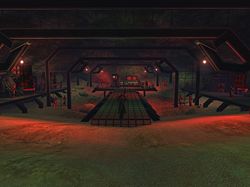 The chill of fear washes over you as you enter. What exactly does Lord recluse have in store? And why is that 'Arachnos Spectator' just staring at you?

Calamity had some final words for you.
You survived the three fates worse than death!

Combat start: "I am here. Chaos will echo from these walls. You will face me now, Character. Prepare yourself."
At 75% Life: "Well now. Nicely executed move. Is there more?"
At 50% Life: "There now! That is more like it!"
At 25% Life: "So the battle has turned, has it?"
Defeated: "My compliments on your victory."
Defeats a villain: "What a pity. Recluse's faith was misplaced."

Oh. Character. You've returned. Like an annoying younger sibling. The kind one can't 'misplace' without law enforcement sniffing around afterwards.

Hello, lamb. Meet wolf. You couldn't stay away, obviously. I knew it, of course.

Succeeded did you? I don't believe you. There should be a sash. Show it to me. Well, the good news is, with Recluse's faith in you restored, we may now - finally - move on. Get it right this time. This is becoming embarrassing.

Your service has been reasonably useful to me. Believe me, that's the best you'll ever hope to get.

Take out Marchand once and for all

The Spider Weaves His Web
Finale

Your luck has changed, Character and I'm going to tell you why. I received some intel that pinpoints the location of President Marchand on this day back in 1963. Apparently, he secured his entire building in St. Martial! Hide in plain sight, I supposed. So I'm going to send you back in time to put that final nail in his coffin.

So your job is to break into the building and get Marchand. If you think the task will be simple, think again. Marchand had many many supporters, both civilian and staff, who did not wish to see him ousted from his position. If you can make your way past his men and get the key to the secure elevator, then you can get to him. Please feel free to eliminate everything in your path. Should you leave witnesses, well, now that would be bad for Lord Recluse, wouldn't it?

Have fun storming the presidential building!

I recommend that you take out all witnesses. Ultimately, it's up to you. But if you get lazy and are caught, I never knew you. 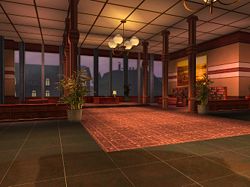 You cleverly piped gas into the building through some of the air ducts beforehand. At least it'll knock a few of them out.

You can feel the hairs on the back of your neck stand on end as you enter the lobby of the Marchand building. It's not every day you attempt to assassinate a president.

You found a hand written letter addressed to Character.
You found the stashed elevator key!
You rifle through Agent Memphis's pockets until you find his key.
You have assassinated President Marchand and made sure to eliminate all traces of evidence.

Loyal Citizen 2: You' re a bad person!

Loyal Citizen 3: I'm not really worried. There is no way anyone could ever hurt the president. It's just not done.

Loyal Citizen 4: How can you try to kill a president as beloved as Marchand? What is WRONG with you?!

Combat start: "The president is already on his way to the roof and a helicopter en route. You'll never get to him!"

Combat start: I'll wipe you out before you get to Marchand.

Before Combat: "I have your assurance that this facility is locked down?"
Combat start: "You can't attack the president of the Rogue Isles!"
At 75% Life: "Where are those aides? Keeping me alive is their job."
At 50% Life: "You treasonous little worm!"
At 25% Life: "You don't know what you're doing! Recluse will destroy the Rogue Isles!"
Defeated: "But my term wasn't up yet..."
Defeats a villain: "Tell Recluse his bid for presidency is TERMINATED."

Tell me you didn't mess this up, too. No? Well it's about time you succeeded at something. All events have fallen into place so that Lord Recluse may, indeed, become the ruler of the Rogue Isles.

Had someone told you that you would be traveling back in time to 1963 to assassinate President Marchand so that Lord Recluse could assume power over the Rogue Isles, you would have told them they were nuts. But that is exactly what you did. Through trials of misinformation, a mulish contact and surviving the three fates worse than death, you proved your dedication to Lord Recluse and finally made it to the Marchand Building in St. Martial.

There, you took on loyalists utterly dedicated to keep Marchand in power, from local citizens to his staff to government operatives hired on to ensure his safety. They were no match for you. You completed your mission and history has come full circle to ensure Lord Recluse's reign. For your trouble and effort, you hold in your hand an old and weathered newspaper clipping, the words barely visible on decaying paper. The headline reads: