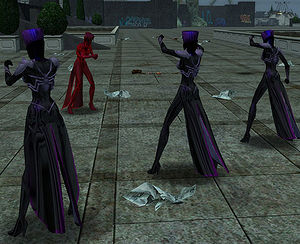 Buttcape is a frequently-used term which refers to the flowing cape-like garments most Widows, Fortunatas and female Arbiters wear, which extends from the waist to the ankles. It bears similarities to the cape design "Fortune", but, obviously, worn from the waist. All of the current Widow NPCs who offer missions, such as Ghost Widow and Seer Marino, wear the "buttcape".

In out-of-game usage, it would be commonly called a coattail. In-game, it is called the Waist Cape.

Much to the dissatisfaction of a large majority of the players, Arachnos Widow, the villain epic archetype, did not come with the option of having the "buttcape" as a costume choice.

Tongue-in-cheek complaints on the official forums about the exclusion of "buttcapes" led developer JLove to respond to a 2008 Official Forums post with:

Someone should write those jerks a letter!

Developer Back Alley Brawler then responded to JLove with:

Where da hell are my buttcapes?

As of Issue 14, only female Widows have access to the Waist Cape, as it is known in the costume creator screen.

So far, there has been no response to queries about male Arachnos Widows.