This Task Force can be completed solo, but due to the difficulty, a team is recommended.

Twilight's Son is found inside the Ouroboros Citadel, near the Pillar of Ice and Fire.

Smoke and Mirrors
Part One

Hello. I knew the time was right for you to seek me out. We have much work to do if we are to save this plane of existence. It is only with your help that we have a chance of setting things right, in this time and others. Steel yourself, hero, as what is to come will test every bit of your strength and resolve. For this task, you will be required to travel into the recent past and restore the natural order of the Chronoverse. Your quest is to stop the Circle of Thorns from opening a portal to the netherworld and bringing their demonic master here to Earth. If not, all is lost. You must seek out three individuals who serve as the 'cosmic key', and keep them out of the Circle's evil hands. If they succeed... well, I can't bring myself to think of it...

Are you familiar with the story of Cyrus Thompson, the hero once known as Breakneck? He and two others are the only means of bringing the demon to earth. Go through the portal and find Cyrus and bring him back here, that I might keep him safe.

If you can keep Cyrus out of their clutches, their master will forever be confined to his own nightmarish realm.

There is no time! Find Cyrus Thompson so the world will not perish!

Cyrus Thompson should be waiting outside of the Skyway City train station.

The Circle of Thorns have escaped with Cyrus Thompson, but all is not yet lost. You must return to Twilight's Son for further instructions.

Combat start: There is nothing you can do to stop us!

You did not find Cyrus Thompson in that time? Odd, perhaps there is more going on here than I first anticipated.

Though you were unable to thwart the kidnapping of Cyrus Thompson, you did strike a formidable blow against their evil. We must stop them from abducting the other two innocents, however, or soon I fear the causality field will ripple forward and all will be lost, now and through eternity.

Your assistance shows your appreciation of me and my lost people. Thanks is given.

Rescue Jimmy Preston from the Circle of Thorns

You can still save the child, Jimmy Preston. Shortly after Cyrus was taken from the train station, Jimmy was abducted from his tenement in Kings Row. I've found a report from that time filed by operatives from MAGI saying they "sensed" a child being held in a nearby warehouse. I believe this is Jimmy Preston. It's imperative that we rescue young Jimmy, as he is even more important that the matter at hand, but... I cannot tell you any more about the "coming storm" without putting it all at risk. just know that with the advent of their master's arrival, the Circle of Thorns grows ever stronger.

Are you up to this task?

Go back and find Jimmy, you must bring him forward so that he can be removed from the events of his time.

Why have you returned without Jimmy Preston? Go... save him in time... for the sake of the world!

The Circle of Thorns are here and looking for Jimmy.

Before combat: "Baron Zoria will be pleased to know the boy is already on his way to the ceremony."
Combat start: "Ah, we were warned you might find us. Well, no matter, as we are more than a match for your pathetic 'powers'!"
"Destroy them, my minions, that our master's coming may proceed!

This is most unfortunate. The Thorns were able to escape with young Jimmy, taking him to who knows where. I wonder how this will affect his future as---well, let's not get sidetracked. There's still a chance if we can get to the last cosmic key before the Circle of Thorns do.

Perhaps, if more of your kind are like you, there is hope for humanity and Kheldian alike.

Go to the Atlas Park fashion show and keep Candy Lebeaux from being abducted.

There was a beautiful woman, a model, named Candy Lebeaux. She was last seen at a fashion shoot in Atlas Park some time ago. She must be the third key to the Circle of Thorns plan. If you can go back there and keep her from being abducted, the Circle of Thorns can never complete their plan.

The safety of Candy Lebeaux is our last hope! Save her, Character!

There is no time for backtracking! Save the model, save the world! 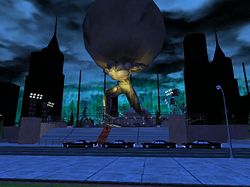 No entrance message given

You have defeated the Sitrix and saved all of the hostages, but Candy was not among them.

Before combat: "Quit your blubbering."
Combat stat: "Finally, something to kill."

Fashion Victim: "Who does your hair?"

After rescue: "I'm MANDY Lebeaux, you tool! Candy is my twin sister! We were doing this shoot together!"

No! They've managed to capture all three of them! We have little to no idea where they will perform their arcane ritual.

But... there might be a chance. Given the clues we've accumulated, I might be able to divine an area where the ceremony may take place. It's a slim chance, and even if you can find it, the odds of you going back to exactly the right time and of you defeating their assembled forces are practically nil. Still, I have faith in you, Character.

Find the Circle of Thorns and stop their heinous ceremony

With all three keys, Baron Zoria can start the ritual that brings his nearly-omnipotent master to earth. There is a very small window of time in which he can do so, however. If you can find that exact moment in time to interrupt the ceremony, even for a few seconds, he will lose that opportunity.

Can I count on you to stop this evil?

The world of today and tomorrow needs you! Go and stop this ceremony before it's too late.

There are mere moments left to save the earth, and time itself! Go now!

The temporal energy crackles off of you as it collides with the mystic power around you.

You have saved Jimmy Preston and Candy Lebeaux, thus, thwarting Baron Zoria's attempts to summon his demon. Regretfully, Cyrus died before you could arrive.

Candy Lebeaux: After Rescue: "That you so much! I don't mind a broken nail or some smudged make-up, but demons are something else altogether!"

Jimmy Preston: After Rescue: "Yayyy! I hope you can save Mr. Cyrus? I like him a lot!"

Rarely have I seen such acts of heroism, in this time or any other. You have honored all those who come before you, and you have set a standard for all those that will follow. I salute you, Character. And grieve not for the noble Breakneck. As a man of the future, I can assure you that his legacy will never die.

You hold an old tarnished belt buckle in the shape the letter B...

As you look at it, you remember Cyrus Thompson and his sacrifice. He dedicated his life helping people and he gave his life saving them. There's no greater hero than that.

It was Twilight's Son who sent you back in time to rescue him, Jimmy Preston and Candy Lebeaux from the Circle of Thorns The Thorns were attempting to bring forth their master from the nether realm and use those three as human sacrifices. Twilight's Son believed stopping this particular sacrifice was tied to the Coming Storm. How? Twilight wouldn't say, "it is the people of this time that can save your world."

Saving people? You think back on this as you remember your last mission for him. You couldn't save them all. Just as you got there, you saw Cyrus Thompson get struck down trying to save the others. You managed to save the other two, but you'll never forget that old guy throwing himself into harms way.

The city put a statue up in front of the Kings Row train station, hopefully other will see him there and remember that being a hero is not how you dress or what powers you have, but who you help along the way.

Unlike the larger Task Forces, Smoke and Mirrors is more like a short Story Arc, and can be soloed easily in under an hour. Consequently, it has no accomplishment badge, and offers only a small merit reward.