Cyrus Thompson is a hero with a faction of Generic Heroes. Heroes can find him during Twilight's Son Task Force.

Cyrus Thompson is a retired superhero who once went by the name Breakneck. His wife gave him the name, not because of his super speed, but because "If you don't give up this nonsense, you're going to break your fool neck." 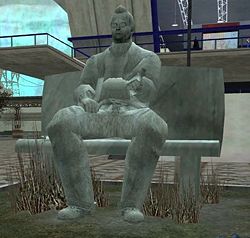 There is a memorial statue honoring Cyrus Thompson located in Kings Row in front of the monorail station. It reads:

Heroes May Die,
But Heroism Never Shall