Do you suppose this should be pale green in color instead of hideous yellow to better match the Symbol we use with it? It would still be rather eye-catching, methinks:

I'm colorblind, but I'm fine with changing it--looks okay to me. I'm not sure I like changing the border to black though. How about this? It's the background color darkened significantly (in HSV, I took V from 100 to 50).

I didn't care one iota about the border color... I was just too lazy to look up a HEX color that looked right.

Better? Toned it down a bit. I guess I don't really get the yellow box idea from that thread. But, if folks have a strong preference not to make it match, that's cool with me. 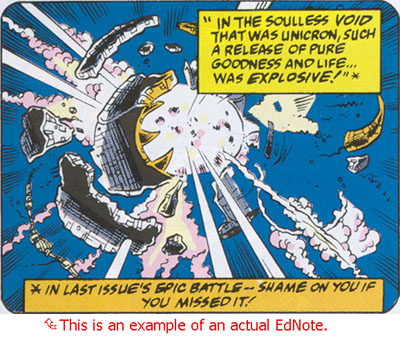 I don't like the green. At all. EdNotes shouldn't pop out like that, they should moderately blend in. The wiki is about the documentation, not the editor's notes. ~ AGGE talk/cons 01:47, 19 April 2012 (UTC)

Are you saying that the green blends in less than the eye-searing yellow it currently is, Agge? Blondeshell: Oddly enough, I never really read many comics. Got into the genre due to all the cartoons in the 90s —Thirty7

*Shrug* In looking more, "eye-searing" was an overstatement... but I also don't think the color "blends in" either. I have to agree with the comic part though, from what I have seen. Oh well, I wasn't overly passionate about a change, just suggesting something I had thought of. —Thirty7

I happened to stumble over

and thought it might literally be interpreted as an EdNote. I also played around with the idea of grey-scaling the image, a la

. My only reason to alter the icon would be to increase the "subdued-ness" and "blending in" mentioned above. As well as the fact that not all EdNotes are really OMG!! exclamation point worthy. So, the literal note/letter might match the idea better. *shrug* Just idle pondering. Any thoughts? —

I would agree that not all EdNotes have the same level of urgency. Some are "Watch Out!" and others are "Oh, by the way." Maybe the template could be adjusted to use the exclamation point if a 'warning=' switch is used, and the letter icon would be on the regular 'note=' switch. Then we can go through and change the ones that are more urgent to use the 'warning' switch. Grayscale's fine with me. —

I see absolutely no reason not to use two icons, so I went ahead and implemented it using an optional type= parameter. I'm not a huge fan of the grayscale though, to me it pops out more than the colored versions and just looks weird besides. Reducing their saturation some might be okay if you really want to tone them down some, but I really don't think it's necessary. The bubble was colored in a way to match the icons, after all (or at least, I assume it was). -- Sekoia 18:30, 11 July 2012 (UTC)

Actually, Sekoia, the icons are sort of a garish green to the pale yellow of the EdNote "bubble." Mayhap a light yellow version of the icons instead? —

Will do. I will just upload as new versions of the greyscaled ones. —

Is there a way to link to an older version of a file without reverting? That way we could do a side-by-side. —

Easier than I thought... but can it be resized? —

Nice, that makes three of us. Going to go ahead and adjust the template accordingly... As always, it's easy enough to revert if anyone has serious issues. —

Issue when EdNote is in dialog boxes?

I was looking at Mission:Tip_-_A_Clever_Trap. I noticed that in the hero section, the EdNote that is contained within the "Officer Worker and Rikti Soldier Dialog" box has some issues. The issue only appears when the EdNote is the first thing after the text= notation within the box. See below for what I mean:

Office Worker: Look, I don't understand what you want.

Office Worker: Look, I don't understand what you want.

So that struck me as odd. I wonder if it's an issue across the board, or just for the one mission? It appears to be across the board, since I tried it with other dialog boxes in that mission. Felderburg 15:19, 19 August 2013 (UTC)